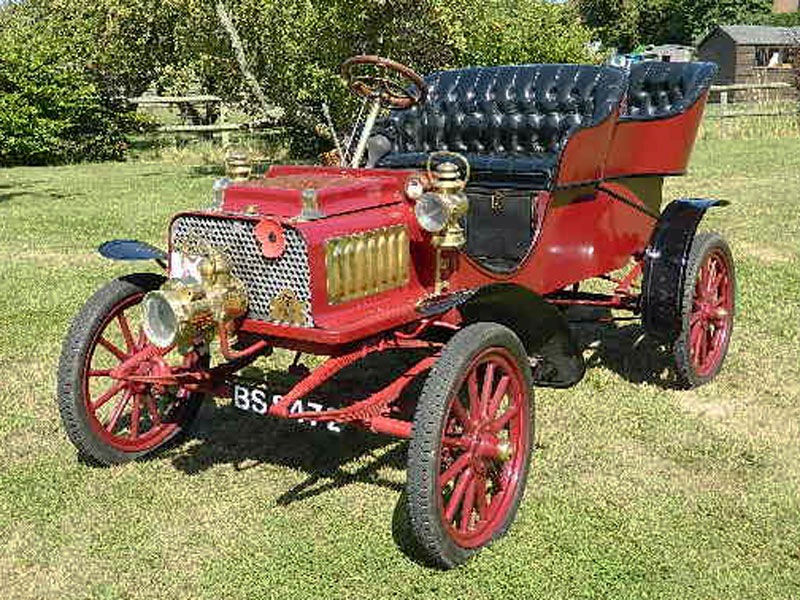 Thomas B Jeffery of Chicago was best known for his Rambler-branded bicycles up until 1897, when he constructed his first prototype motorcar. Following positive reviews at the Chicago and New York motor shows, he entered the motor industry in earnest in 1900, setting up shop in the former Sterling cycle factory of Kenosha, Wisconsin. His new car was an instant success, and by the close of 1902 no less than 1,500 examples had been produced. This immediately made Rambler America's second largest car producer, as the figure was only bettered by Ransom Eli Olds's curved Dash Oldsmobile. Rambler was also among the first to experiment with steering wheels in place of tillers (though was initially unsure drivers would accept so dramatic a change), and was reputedly the first manufacturer to equip its vehicles with a spare wheel and tyre assembly. In 1914 Jeffery's son replaced the Rambler name with that of Jeffery in honour of his now deceased father, and two years later the company was sold to Charles Nash during the creation of Nash Motors.

This charming righthand drive four-seater veteran is a single-cylinder, light touring model equipped with electric starter, three-speed gearbox, elliptic springing all-round, detachable tonneau, and brass side lamps and horn. It sports Red coachwork and quilted Black trim and would have cost its first owner the princely sum of $850 back in 1904. Apparently restored in the 1980s, the Rambler at one stage belonged to a senior national official of the Horseless Carriage Club of America, who reportedly completed a 150-mile tour in the car just before it was sold and imported to the UK in 2007. The vendor presently views the bodywork, paintwork, interior trim, engine and transmission as all being in 'good' condition and is selling 'BS 8472' complete with a VVC dating certificate that was granted in 2012.
Share: