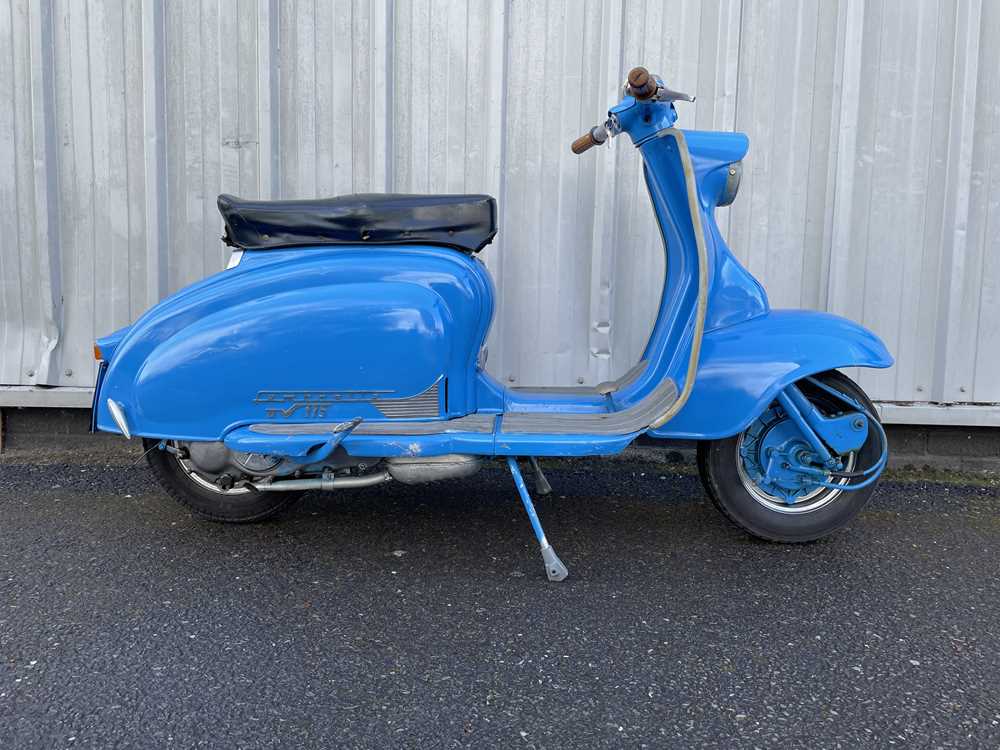 The Lambretta TV175 Series 1 was launched in September 1957 and was a very different kind of scooter than all that had gone before it. It was the first scooter of the Li range and appeared some 7 months before the Li. The new 4 speed TV machine was able to reach an unprecedented 103 km/h (64 MPH) which was a significant improvement on the 3 speed LD models which it replaced. However, the new engine was not without its problems and various changes to the design were made during its short production run to improve things. It had a large carburettor with a diaphragm and a complicated kick start arrangement. Early examples had cable adjusters on the handlebar levers. The rear suspension had a combined spring and hydraulic shock which allowed the engine to swivel silent mounts. Wheel rims had chrome edging. The rear light had a triple bulb arrangement with an orange lens either side of a red centre. The new enclosed chain driven engine had an increased capacity and the crankshaft, barrel, piston and gearbox ratio were changed. Front forks were fitted with external shock absorbers. The Rear plate and fork links were redesigned to cope with the extra power. TV175 models were fitted with a Veglia 120 km/h speedometer face and a dual seat. The ‘Lambretta’ and ‘TV175’ side panel badges were attached to the panels with small nuts as opposed to the riveted badges on the Series 2 Li panels. Often referred to as the ‘Tourer’ it had a superb performance coupled with beautiful styling and has been hugely sought after for many years by collectors.

This sound and complete example was reportedly produced in February 1958 according to Innocenti records and imported into Belgium from Italy around the year 2000. She was then imported into the UK in 2019 and registered around that time. She has all of the original important and hard to find TV175 Series 1 components. Most notably the original Aquila Continentale seat with its original cover. Original keys, believed original Becme ignition, Becme switch, original speedometer, and all engine components are also original. It also has the correct original rear hub and light fittings. She has been subject to an amateur all-over paint covering. Upon close inspection she appears rot free and in solid working condition. She is supplied with an original replacement front brake lever. The Lambretta TV Series 1 is a hard model to find particularly in complete good state and working order. This example would make a perfect basis for a quality restoration or customisation. She has a V5 and could be used on the road as she is.