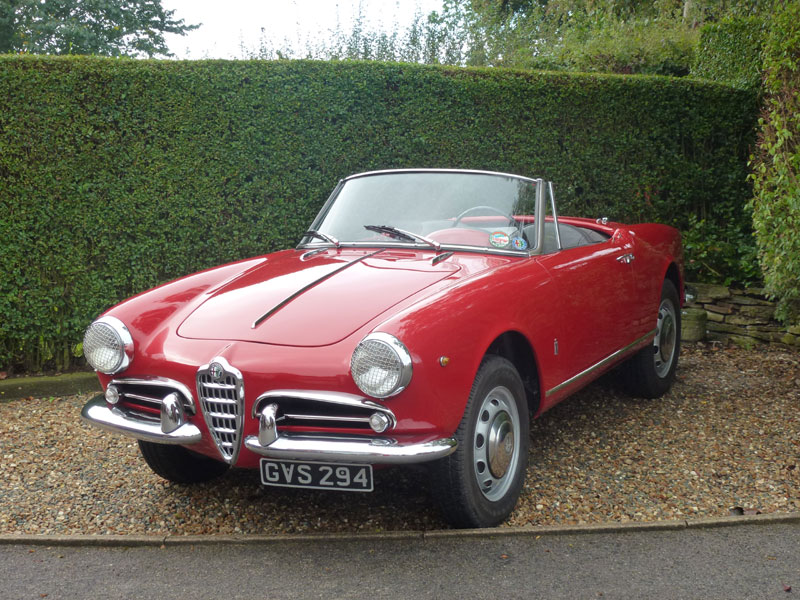 This extremely pretty 101 Series Giulietta Spider is the product of a three year labour of love by the vendor and, not just one but, a pair of dilapidated Alfa Romeos. The first was purchased in 1976, but the bodyshell was eventually scrapped when found to be too corroded. Useful items salvaged from this vehicle included: engine, gearbox, propshaft, rear axle, steering wheel, instruments, switches, the remains of the hood (for pattern), hood frame and various items of trim. The second vehicle was acquired in 1981 after living in a lock-up garage in Wimbledon for many years, following importation from the Channel Islands in 1967. It had apparently been used as a source of spares by the previous keeper and was now effectively a rolling shell which, at some time, had suffered the indignity of possessing a badly fitted Ford engine and gearbox. The remains were winched out of the lock-up and trailered to Nottingham. The project was then shelved to 1989 owing to other commitments.

At this point the shell was completely dismantled and all corroded metal removed. A new rear skirt was purchased from Milan, while all other replacement panels were fabricated by the vendor and arc welded into place. The finished body was leaded as required, etch primed and ultimately finished in many coats of hand flatted Rosso cellulose, courtesy of a home-built compressor. The mechanical items saved from the first car were all renewed or refurbished and everything brought together for the first time. The only work not undertaken by the vendor concerned the hood, hood cover, upholstery, carpets and chroming. Some 40,000 miles have been covered since the completion of this historic restoration, the tangible reward for which is a range concours cups and certificates. The pretty little lefthand drive Alfa is now offered complete with the above plus V5, old MOTs etc.

PLEASE NOTE: This vehicle has covered 40,000 miles since the restoration and not the 14,000 as stated in the printed catalogue.
Share: