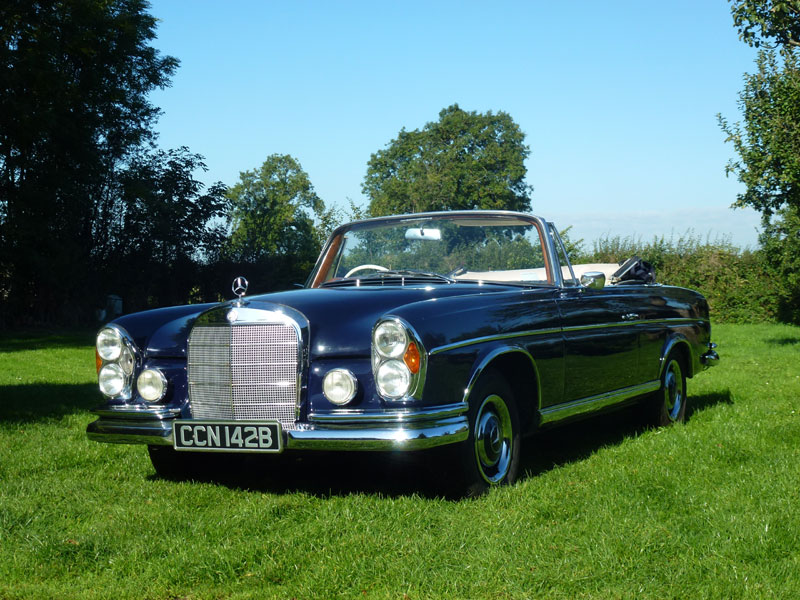 Successor to the well respected but somewhat staid 'pontoon' range, the W111 Series was introduced in May 1959. Soon nicknamed 'Fintails' due to their overt American and Italianate styling cues, the new models were built with safety and passenger comfort as a priority. Charged with translating Paul Bracq's elegant sketches into production reality, Karl Wilfert (body design) worked closely with fellow department heads Josef Muller (engines) and Rudi Uhlenhaut (chassis dynamics) to ensure that the W111 met chief engineer Fritz Nallinger's stringent expectations. Built around a monocoque, it featured independent coil and wishbone front suspension and a swing axle rear (the latter being tempered by a transverse leaf spring that brought welcome extra composure under cornering). Exhaustively tested on German, Austrian and Italian roads prior to release, the 'Fintail' proved to be so well honed that the factory team came first, second and third in the 1960 Monte Carlo Rally.

Unveiled in April 1961, the flagship 'Fintail' - the 300SE - was given its own type designation of W112. Powered by a Bosch fuel-injected M189 2996cc straight-six engine (derived from that of the legendary 300SL 'Gullwing'), the luxurious newcomer was equipped with air suspension, four-speed automatic transmission, power steering, four-wheel disc brakes, leather upholstery and burr walnut veneers as standard. Initially available in four-door Saloon guise only, Mercedes-Benz's range topper could be had as a two-door Coupe or Convertible from March 1962 onwards. A decidedly handsome design (roof up or down), the 300SE Cabriolet enjoyed a notably pliant ride and effortless performance. Fearsomely expensive, the rakish soft-top accounted for just 708 sales between March 1962 and December 1967 (though, a mere 92 of those were to right-hand drive specification).

First UK registered on 31st December 1964, chassis 11202322005461 is rumoured to have been supplied new to a diplomat who subsequently used it in South America, Australia and North America. Somewhat down at heel when acquired by Mercedes-Benz specialist Walter Nieuwkoop during 2004, the 300SE Cabriolet's subsequent restoration was chronicled in various issues of the UK Mercedes-Benz Club's Gazette magazine. As well as a bodywork rejuvenation and respray, the four-seater received attention to its fuel system, air suspension, cylinder head, hood and brightwork etc. Mr Nieuwkoop was awarded the '40th Anniversary Trophy' at the UK Mercedes-Benz Club's 2008 Christmas Dinner for the work he had put into the car.

Further improved since entering the current ownership, the past four years have seen 'CCN 142B' benefit from a rejuvenated air suspension pump and four new air suspension bags (even though only one was leaking) plus the associated pipework. Additionally treated to a stainless steel exhaust and reconditioned automatic transmission not to mention the refurbishment of its Cream leather upholstery, the Mercedes-Benz has not long been serviced and MOT tested. Increasingly collectible, good examples of the 300SE Cabriolet are rightly sought after.
Share: