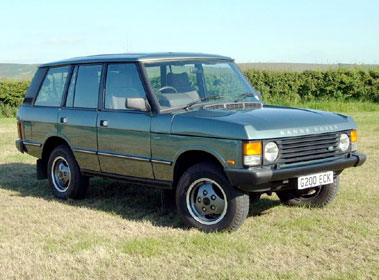 The Range Rover defined a new breed on launch in 1970: able to run the farm or go to the opera, Spen King's masterful design refined the concept of the go-anywhere 4x4. So right first time, its sharp styling barely changed until the model was superseded by a larger replacement bearing the same name in 1995. With permanent four-wheel drive and torquey power, it could climb any mountain, while all-round coil springs and disc brakes kept ahead of its pretenders. Like that other design classic the Mini, it grew up from the early utilitarian version into ever more luxurious offerings, and, though the all-alloy 3.5-litreV8 provided an abundance of smooth power, buyers hoped for more economy. So in April 1986 the diesel version was born, with turbocharged intercooled VM power, coupled to five-speed, all-wheel drive manual transmission.

This classic Range Rover, wearing nearly-new Michelin tyres, is understood to have recently received an overhaul to the diesel and injector pumps as well as a new upper rear tailgate to quell worries about one of the model's few noted rust spots, plus a new fuel tank. It has the manual five-speed gearbox and has only covered a claimed under-50,000 miles. The vendor, an agricultural engineer, says: "The coachwork is excellent, apart from a few minor marks on the roof. The interior is excellent too, the electrical equipment is fully functioning and there are no problems or major oil leaks with the engine. The transmission is smooth". This imposing classic wears a stainless steel exhaust and was recently serviced by a Land-Rover specialist less than 2000 miles ago. Offered for sale with Swansea V5C Registration Document, the road fund licence is current until the end of October 2009.
Share: