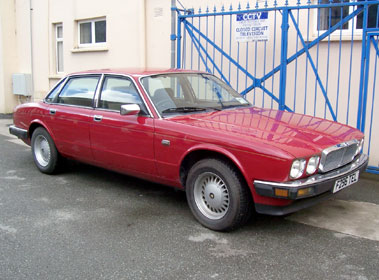 Launched on August 28th 1986 as a replacement for the ageing Series III cars, the all new XJ6 (or XJ40 to use its code name) was well received by the contemporary motoring press. Boasting all-round independent suspension, power-assisted rack and pinion steering, four-wheel disc brakes and generous levels of sound deadening, it proved a credible alternative to the Mercedes-Benz S-Class and BMW 7-series. Initially available with a choice of 2.9 litre SOHC (165bhp, 176lbft) or 3.6 litre DOHC (221bhp, 248lbft) AJ6 straight-six engines allied to either five-speed manual or four-speed automatic 'J-gate' transmissions, the XJ40 allowed potential purchasers to prioritise performance over economy and vice-versa. Though, for some the adequate performance and lower running costs promised by the smaller powerplant proved hard to resist (period road tests spoke of 0-60mph in 9.9 seconds, 120mph and 29.7mpg).

Finished in red with beige cloth upholstery, this particular example is described by the vendor as being in "good" condition with regard to its engine, five-speed manual gearbox, electrical equipment, interior trim, bodywork and paintwork.
Share: