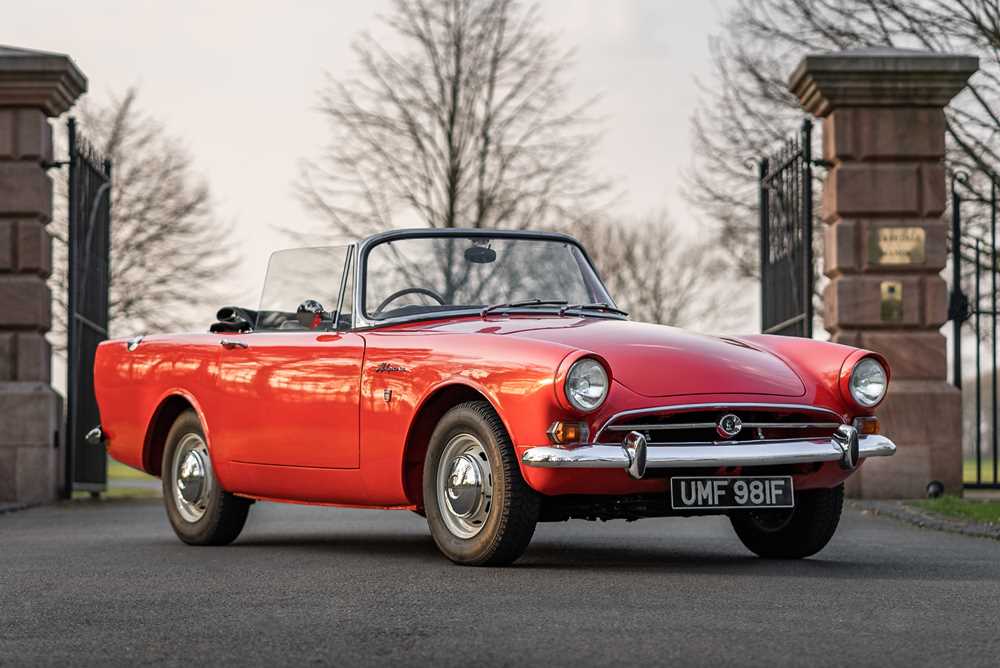 Unveiled in 1965, the final MkV variant of Sunbeam’s popular Alpine sportscar was equipped with the Rootes Group's latest four-cylinder engine - a five-bearing 1725cc unit rated at 92.5bhp - which proved notably more powerful and refined than its predecessors. Further benefiting from the adoption of negative earth electrics and an alternator, the newcomer was reputedly capable of over 100mph. Treated to some subtle internal / external cosmetic tweaks as well, it emerged boasting a crisper, more modern look. Only produced for three years, the Alpine MkV was quietly dropped from the Sunbeam range in 1968.

Finished in Carnival Red with Black upholstery, ‘UMF 981F’ was acquired by its current keeper in 1992, however it wasn’t until 2015 that a decision was taken to treat the car to a comprehensive no-expense-spared restoration. The bodyshell was stripped back to bare-metal and is said to contain zero rust whatsoever, having been treated and correctly finished in 2K paint. Opting to restore ‘UMF 981F’ to a particularly high specification; new rear springs and adjustable shock absorbers were fitted all around and the underside of the roadster was Waxoyled for preservation. Breathing through twin Stromberg carburettors, performance is said to be “sprightly” – this is further enhanced by a four-branch manifold and stainless steel exhaust system. Highly suitable for long-distance touring, this exquisite Alpine even features a Quartz headlight conversion, which aids safety and practicality.

Described by the vendor as being in ‘excellent' condition with regard to its bodywork, electrical equipment, engine, four-speed manual (plus overdrive) gearbox and interior trim condition; this appealing Alpine is offered for sale with a current V5C registration document, sundry paperwork and an MOT certificate valid until September 2022.