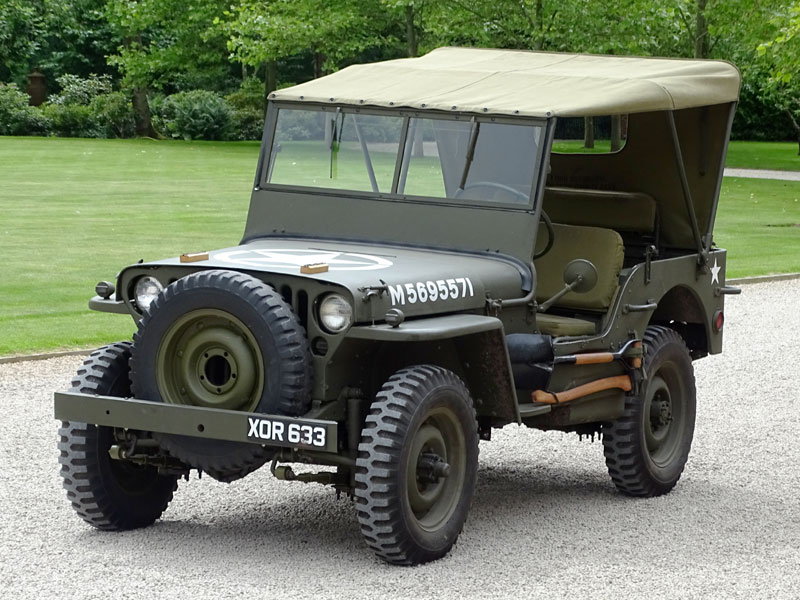 Arguably more iconic than a Sherman Tank or P-51 Mustang, the Jeep is for many the definitive WW2 vehicle. Equipped with a torquey L-headed 2.2-litre engine driving all four wheels via a three-speed manual box and two-speed transfer case, the tough, go anywhere four-seater did its job exceptionally well. By the end of the war, 647,870 Jeeps had been produced - 281,448 of which were manufactured by Ford. According to a brass Ministry of Supply plaque affixed to its inner wing, this particular example - chassis GPW95571 - previously bore the British military registration number '19-YH-26' and was treated to an overhaul in March 1955 (some four years before the Ministry was disbanded). Demobbed and granted the civilian number plate `XOR 633' by Hampshire County Council on 8th February 1960, photographs on file suggest that the Jeep underwent a `chassis up, body off' restoration in the past. Accompanying invoices from Jeep & Dodge Specialist Dallas Auto Parts of Newbury show that penultimate keeper M. Haynes had them overhaul the brake system, fit a new engine timing chain, carry out a total rewiring, install a new winter canvas kit and supply a new dynamo etc between 1999 and 2004. Subsequent custodian Christopher Golding of Bristol is understood to have further improved the Ford before selling it to the vendor in 2007. Part of an impressive private collection for the past decade, `XOR 633' has been used to entertain his grandchildren and as period transport at the Goodwood Revival etc. The springs have been exchanged, a transfer case oil leak cured and the engine overhauled in 2014 (reground crankshaft, re-honed bores, new pistons / rings / valves) but otherwise he has not had cause to touch the Jeep which still presents very well. Among the smarter examples we have encountered and boasting a UK history that dates back to the 1950s, it has charm aplenty!
Share: