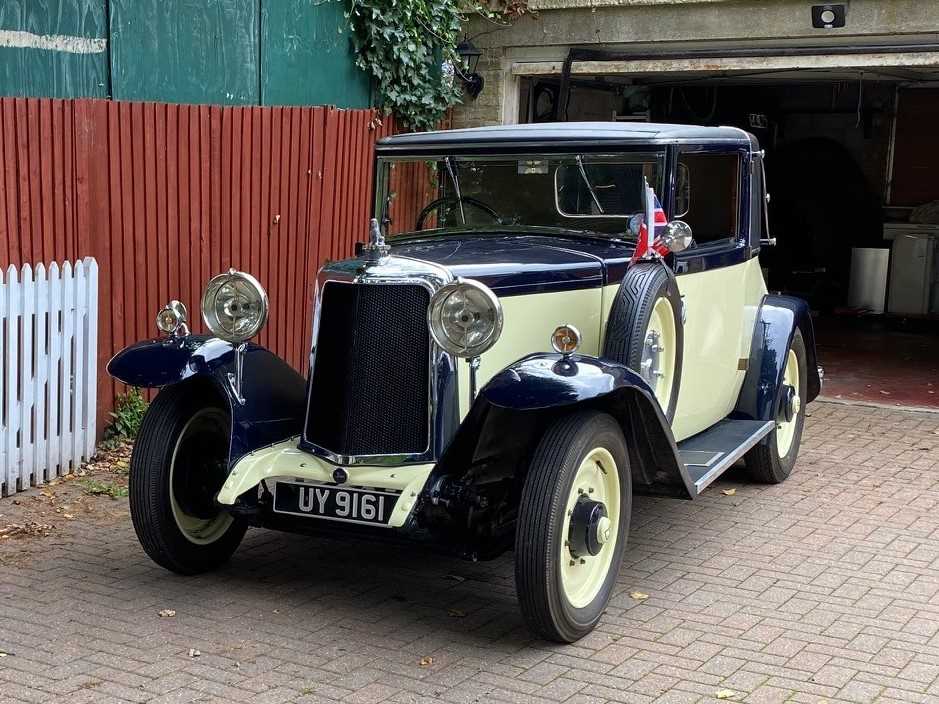 This appealing 15hp ‘Sunshine Coupe’ is believed to be one of only nine examples built and the only one of these still surviving. Its Salmons Tickford coachwork originally offered space for three sitting abreast up front although the car now sports two non-standard bucket seats for driver and passenger whilst the rear is converted for extra luggage space. A period suitcase adorns the boot. Aside from the amended seating the car features nickel headlamp surrounds (not chrome) and a nearside side-mounted spare wheel carrier. Originally UK registered in December 1930, it was resident in Germany for several years where it was restored in the 2000s at huge cost – we are advised some £200,000 was invested in the works and there are numerous bills contained within the large history file together with a book of photographs. Re-imported to the UK in 2018 it has been used sparingly since but is described as being on the button. Offered with Swansea V5c and various original handbooks and sales literature in addition to the copious invoices mentioned above, this unique Doctor’s Coupe is worthy of close inspection.

Powered by a 1900cc six-cylinder engine with detachable head allied to four-speed Wilson pre-selector gearbox, the control for which is mounted above the steering wheel (“the last word in suppleness and silence” according to the advertising literature of the period), the 15hp was offered at £495 ex-works. Testament to the company’s products came when a four-year-old 20hp with 54,000 miles recorded travelled from Lahore to London (6,000 miles) at an average of 140 miles a day and 17 miles per gallon.

Announced in October 1927, the 15hp models were offered with the same range of coachwork to be found on the 14hp chassis, the main difference lying in the 15hp’s six-cylinder sleeve-valve engine as opposed the OHV four-cylinder of the 14hp. The Fifteen was quiet, smooth and flexible with a top speed of 55mph and soon proved its worth in endurance events like the RAC Rally and the Monte Carlo. In October 1930 a change to a vee-shaped radiator modernised the car’s looks whilst a lower centre of gravity and widened chassis introduced in 1928 had improved stability. In February 1929, after some 2500 chassis had been laid down, the Mk2 was introduced. The water pump was moved and driven off the camshaft, a new steering arrangement adopted in 1932 (worm and nut replacing the old worm and segment system), the radiator design was altered, gear ratios changed, and the handbrake improved. In July 1929 the fuel tank was moved from the scuttle and mounted at the rear, capacity being increased to 12 gallons. Further revisions had been introduced in March 1930 including the introduction of the Wilson pre-selector gearbox, a banjo rear axle and re-siting of the handbrake lever to the driver’s side of the car. By now the 15hp was a big improvement on the old 14hp from which it had been developed and production was to continue until 1934 when the 17hp model was introduced.

Formed in 1919 by a merger between Armstrong Whitworth and the Siddeley Deasey Motor Company, Armstrong Siddeley would become world famous for its engineering, the roots of which stemmed from its prowess in aircraft production. Indeed, an advertising slogan of the time was ‘The Car Of Aircraft Quality’. Operating from the works in Parkside, Coventry the Company remained in business until 1960 when it merged with Bristol and effectively disappeared.