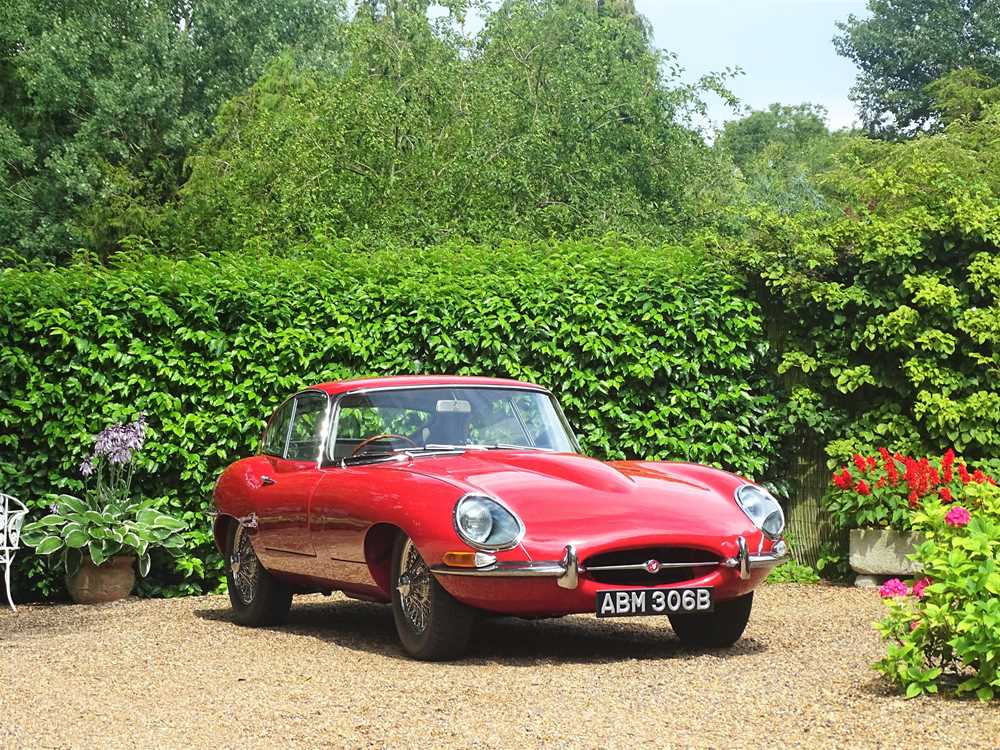 This notably early 4.2 E-Type was supplied new in LHD form via Jaguar Cars of New York. It left the factory in December 1964 but appears not to have been registered to its first keeper, a Curtis Whitlow Hammons, until July 1967. It is possible it was retained as a demonstrator during this period. ‘ABM306B’ remained in his ownership prior to being imported to the UK by SNG Barrett and sold to Midland Sporting Classic Cars of Burton from whom the vendor acquired it in 1989. It has therefore had just two private owners from new and the mileage of c.107,000 miles is believed to be correct. Retaining its original engine and subframe, the car was subject to an extensive restoration which was completed in 2009. Converted to RHD, it also received new outer sill panels, new door skins, rear arch repair panels, new foot wells and lead loading around the rear hatch. The vendor advises the remainder of the bodywork is original including the boot floor, monocoque floor and bonnet. Originally painted blue with navy blue leather, it was repainted in Carmen Red with pale grey interior by Suffolk & Turley. A detailed record of expenditure accompanies the car.

A number of recognised changes to original specification have been made to improve the driving experience and include; Coopercraft four-pot front brake callipers, XJ Series Two rear brake callipers, XJ12 3.07 LSD, Copper brake lines, Koni shock absorbers, hidden small modern washer motor and a US-made ‘Coolcat’ fan operated by a restored Otter Switch. Cared for to a high standard since, the vendor now rates the bodywork, paint, and trim as “excellent” and engine & transmission as “very good”. Offered with a large collection of invoices and old MoTs this fine-looking E-Type could not be replicated for the asking price.

Launched at the 1961 Geneva Salon, the Big Cat was the fastest production car of its time - capable of hitting 60mph in a whisker over seven seconds and a top speed of 150mph. Certainly few could match its reputed 150mph top speed. At a time when Ferrari's lauded 250SWB and 250GTO made do with 'live' rear axles, the E-type utilised a sophisticated independent rear set-up with inboard disc brakes. While, rack and pinion steering enhanced the monocoque chassis's excellent roadholding and handling; putting it light years ahead of American designs like the Corvette. The engine size was increased from 3.8 to 4.2-litres in October 1964 and, with the change, came a sweeter all-synchromesh gearbox, better brakes and electrical systems, and more comfortable seats. The suspension was independent all round with wishbones and torsion bars at the front and wishbones, radius arms and twin coil springs at the rear. Braking was by servo-assisted Dunlop discs all round; inboard at the rear. The steering was a rack and pinion system by Alford and Alder. Though the 4.2-litre engine had more torque than its predecessor, an increase in both gearing and bodyweight meant the performance of these later Series 1 cars was very similar to their earlier 3.8-litre siblings. 7,770 4.2-litre Fixed Head Coupes were built between 1964 and 1968.