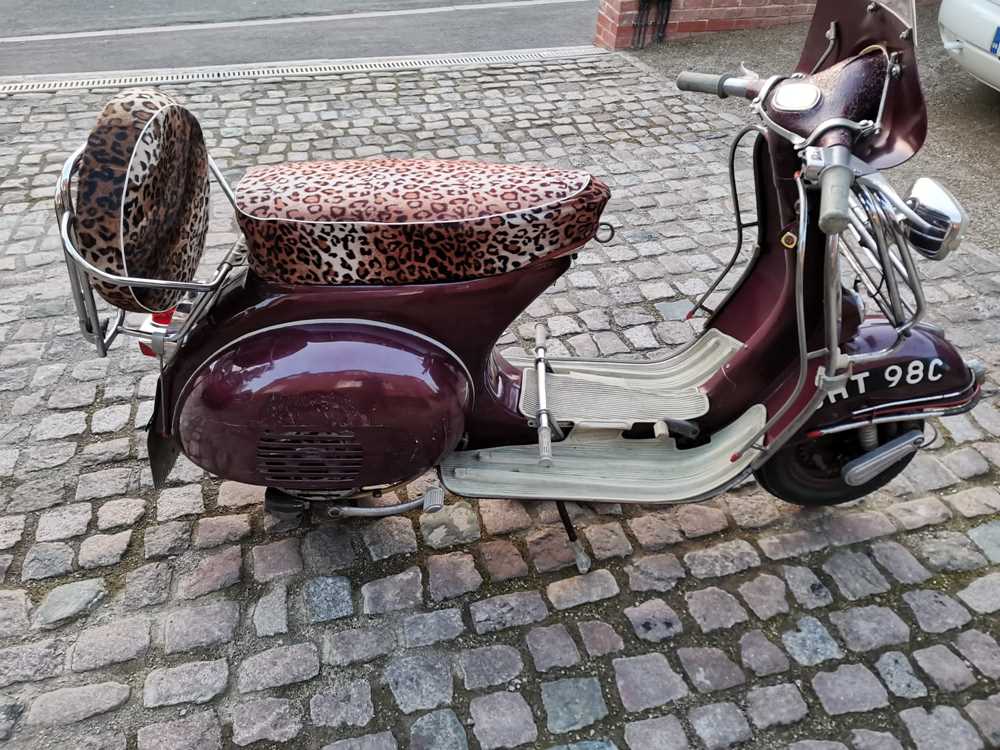 The Piaggio industrial group was devastated by the consequences of World War 2. Amongst the projects muted to rescue the company was an idea to help mobilise the Italian public with a new transport concept ‘The motor scooter’. During trials the buzzing noise of the engine and body shape combined for the scooter to be christened the ‘Vespa’ the Italian translation for wasp. From the launch in 1946 it was such a success that it has become a symbol of taste, fashion and style and is one of the favourite global design icons of all time, The Vespa. The first time a Vespa was seen in Great Britain was on the Douglas stand at the 1949 Motor Cycle Show. The scooter was discovered by Douglas managing Director Claude McCormack when the struggling company was in the hands of the official receiver. The Vespa presented itself as a solution to the companies problems and a deal was made with Piaggio to begin production of the Vespa under licence in Britain starting with the ‘Rod model’ launched in March 1951. Piaggio soon regretted this decision and consequently Douglas under-performed and was several years behind the Italian models until the late 1950’s when parity was almost made. The result in todays international collectors market is that British built Douglas Vespas have in recent times emerged with a special rarity status. The Grand Tourer was one of three special edition Sportiques made by Douglas in Bristol. The ‘Grand Luxe’ and ‘Supreme’ were built from 1962 to 1965 but the ‘Grand tourer’ was only built in a small window of 6 months from December 1964 to May 1965 and only produced in Polychromatic Maroon colour. It was supplied fully accessorised with front and rear luggage racks, a mod style small windscreen, a footrest bar with ‘Vigano’ rubbers and double Vigano leg shield protectors. The GT was the only Sportique that did not have the ‘Sportique’ badge on the leg shield.

This GT was sympathetically brought back into service around 10 years ago and at the same time the electrics were changed from 6 to 12 volts. The accessories on this GT are all the original fitted items save the front luggage rack which is in itself a rare original Ulma version, and the addition of a period Wipac spot light. This GT has the correct 5ME matching numbers and the original six digit registration from new. Additional features include; the original D handgrips, original P Douglas front badge, Original Vespa stamped wheels, the original white Denfield white Douglas seat in good condition, period Michelin tyres, original SIEM lights and horn with internals covered to 12V, original replacement Veglia 60 MPH speedometer, original period original watersides and stickers, original grey plastic stand feet, original steering lock with key, and period GB badge on the original mud flap. The current owner has had this scooter for approximately 6 years. The description ‘rare’ cannot be overstated in this case. A truly collectible Vespa.