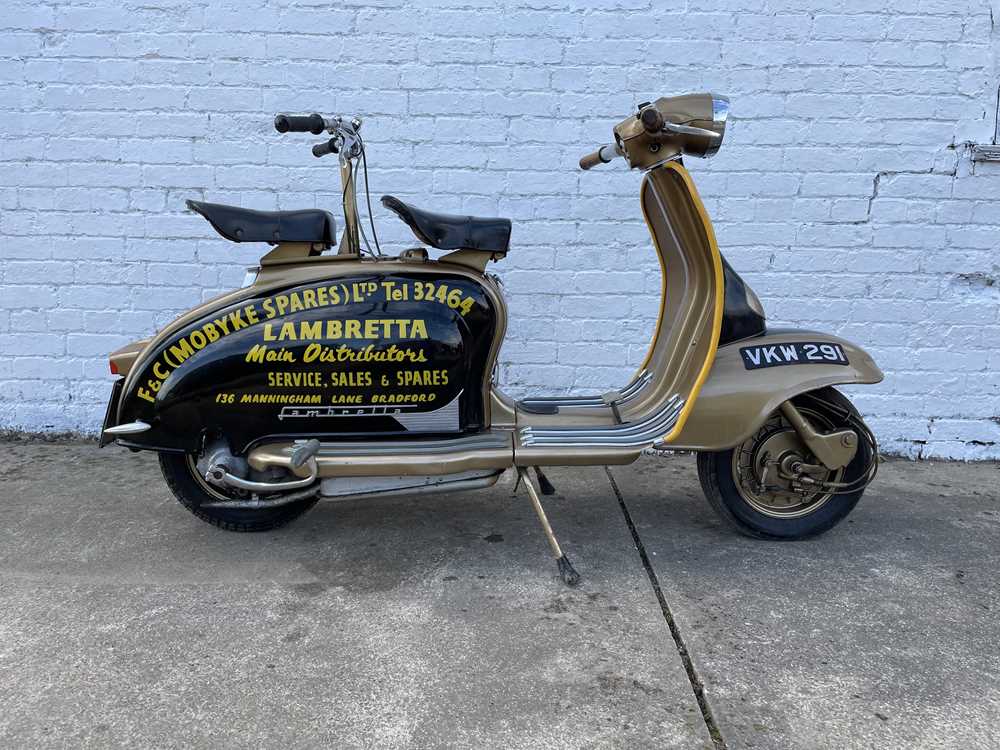 The Lambretta Li150 Series 2 was launched in October 1959. Based on the successful Li Series 1 the obvious difference was the position of the headlight on the handlebars. It had an engine based on the Li150 Series 1 but with an increased stroke and several other small modifications all over the scooter that made it the best-selling Lambretta of all time.

In Great Britain in the early 1960’s the market for scooter riding was still on the increase and one idea to help new riders learn to ride was the creation of a range of dual control Lambrettas on which an instructor would sit giving instructions from behind. The scooter also had a complete set of ‘school teacher’ cable controls from behind that would allow a second clutch, rear brake and kill button mounted on a set of handlebars. These machines were created in a short run by Lambretta Concessionaires the importer of Lambrettas for Great Britain and it is unknown how many they adapted for the purpose. It is understood only two of the series 2 versions have survived.

This rare original dual control Lambretta series 2 was ordered new by F & C Mobyke a motorcycle and scooter dealer in the north of England The company had one of the dual control delivered on the 14th April 1961 and had it painted in the livery you see today. We have found a copy of the original buff logbook for this scooter online. It was used by F & C Mobyke until 1974 when it was put into storage. In 1972 the company changed its name to Rossefield Motor company. It had only covered only 9642 miles in its life and the same mileage is showing now today. The Gold paint, Yellow Candy trim, St. George Concessionaire badge and sign written panels are all original of the era and are in remarkably good condition. Some parts have been touched up under the panels and the cowlings are Blue. The rear handlebars are original but have been re-chromed at some time. We are told the dual control levers as well as the cut-out button all work.

The scooter was sold by Rossefield Motors to Perry Lewis of Totally Scooters we believe in February 2002. It was then sold to a Californian collector Carl Kruger who had custody until 2014 when he sold it to the current owner who had it re-imported back into the UK in 2014. The import papers come with the scooter. It also appears that either Rossefield Motors or Perry Lewis transferred the original registration number VKW 291 as a private plate and it is now registered to another vehicle. The newly allocated registration number is HAS 838 which is on the DVLA system for registration should the new owner wish to put the scooter on the road.

This scooter captures and defines an important moment in the history of British scootering. The 'Look at Life film - Scooter Commuter' can be found online and features a similar machine in use. It is a very rare opportunity to acquire this desirable model in such an original and personalised state in dealer livery with all over matching patina. Instant cool and a superb investment.