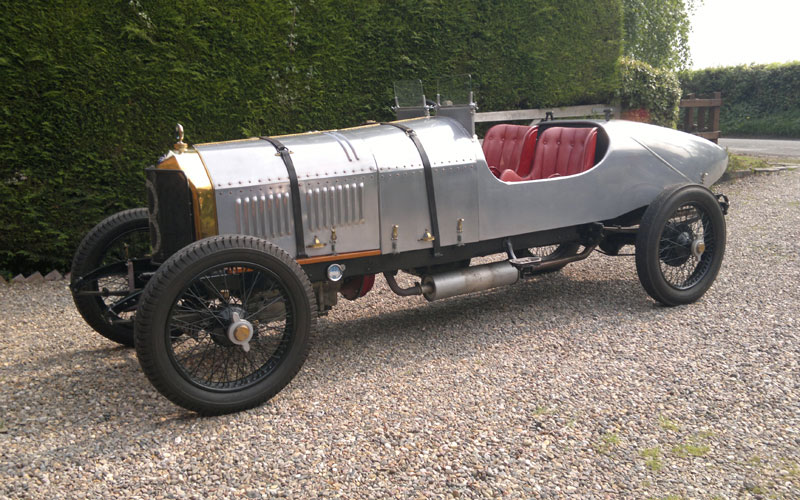 W O Bentley's first major step on the road to automotive celebrity concerned the 1912 purchase, with his brother Horace, of the London DFP (Doriot, Flandrin et Parant) dealer Lecoq and Fernie, which they duly rebranded Bentley & Bentley. It was while visiting DFP in Paris that W O first espied an aluminium alloy piston - an innovation he then employed with great success in his racing DFPs. The 12/40 Speed Model was the embodiment of all his tuning expertise and was built exclusively in France by DFP for Bentley & Bentley. It captured 12 of the class B Speed records at Brooklands in 1913 and 1914 and finished 6th overall in the 1914 Isle of Man TT. Archives show W O driving that TT car with the registration 'LL 2687'. Although not conclusively proven to be the same vehicle, the DFP now offered is certainly an historic machine from a key period in W O's life, that would shortly lead to the establishment of Bentley Motors and its immortal 3 Litre model.

It was 1986 when Cedric Cook spotted an advert for a DFP, stated to be in poor condition. It was in France and totally dismantled, but turned out to be a remarkably complete 12/40 Speed Model that the seller, a Monsieur Fallot Hughes, had acquired in the UK, complete with the registration palate 'LL 2687'. On the assumption that this and the car photographed in the Isle of Man were very possibly one in the same, it was then completely restored in that guise. The body re-construction was entrusted to Martin Hull and the badly rusted chassis remanufactured to the same gauge and pattern as the original. The only completely non-standard, non-original component is the electric starter motor. This uniquely interesting motorcar is now offered complete with that all-important registration number and VSCC eligibility document.
Share: