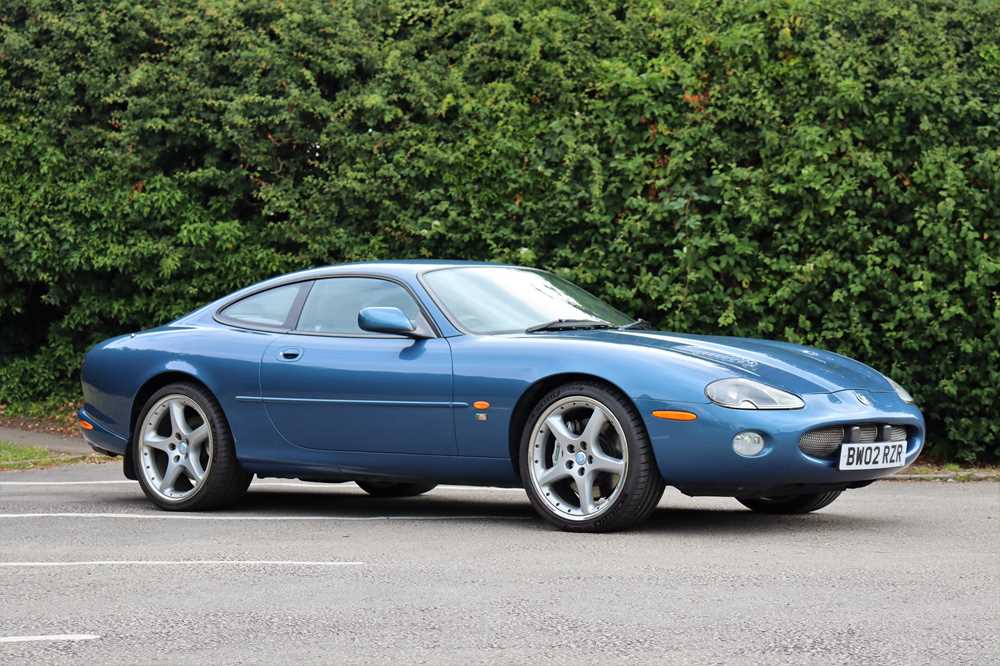 The sleek-looking Jaguar XK8 first broke cover at the 1996 Geneva Salon as a replacement for the ageing XJS. Designed in-house by Geoff Lawson, the newcomer (in common with the Aston Martin DB7) was based on a much-modified XJS platform - the changes to which included the adoption of XJ40-type independent rear suspension. The standard version of the XK8 was powered by a 290bhp normally-aspirated version of the company's AJ26 V8 engine, and for those requiring more performance, Jaguar offered a supercharged version, the mighty XKR. Like the XK8, this 370bhp monster was available in closed or open guise and could hit 60mph in a whisker over five seconds and power quickly to the electronically-limited top speed of 155mph.

Manufactured in 2002, the XKR offered was dispatched new through Dunham Jaguar of Luton, being supplied to the original owner on the 21st of August. Fitted with the 4196cc Jaguar supercharged V8 engine with the later six-speed ZF automatic transmission, the XKR is finished in Adriatic Blue Mica paintwork with Black leather interior upholstery. Previously owned by the Coronation Street actress, Rita Lester, ‘BW02 RZR’ was acquired by the vendor in 2018 and at the time of consignment has covered 68,578 miles from new, although has a displayed mileage of 49,969 miles having received a documented instrument cluster (with speedometer) change by Dunham Jaguar at 18,609 miles.

Well-specified from new with optional extras that included rear parking sensors, satellite navigation, in-built telephone, speed sensor, and desirable split-rim wheels, the Jaguar has been subject to much approvement while in the vendor's ownership. This has included a replacement coil pack and speed sensor, bodywork renovations, and service in 2019; new headlining, front wishbone arms, and suspension remediation in 2020 (costing over £1,100); and another service in 2021. ‘BW02 RZR’ is offered with a history file which includes the original book pack with stamped service book displaying fifteen entries (the majority from Jaguar main dealers) as well as a collection of invoices for work completed, previous MOT certificates dating back to 2005, paperwork ownership relating to the ownership history, and a current V5C document. Shod with matching Michelin Pilot Sport 4’s all-round, the XKR is offered with a no advisory MOT certificate until November 2022.