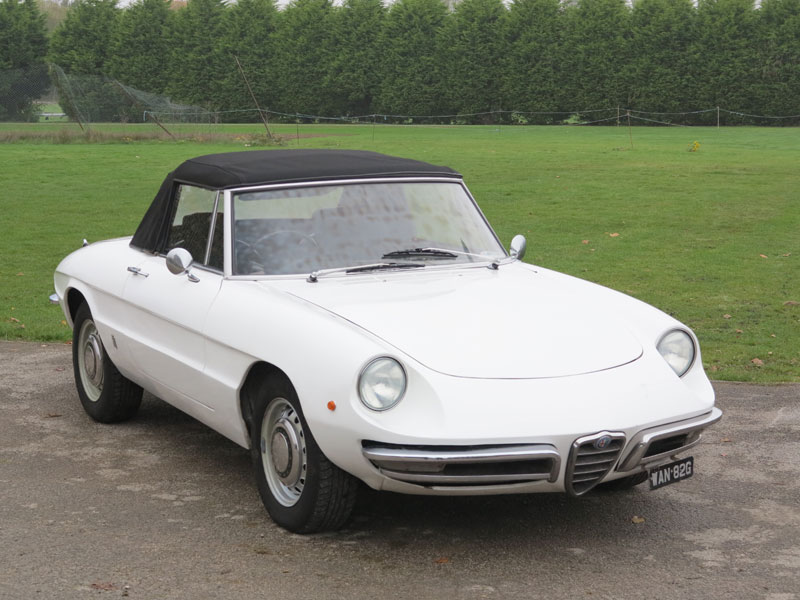 - 1 of 266 RHD models made, original service book and manual

The 'Pinin' Farina-penned Spider first broke cover at the 1961 Turin Motorshow, though production did not commence until 1966. One year later the model was immortalised by the Dustin Hoffman film 'The Graduate'. The chassis was based on that of the Giulia 105 and the Series One examples were powered by a 1570cc version of Alfa's sonorous four-cylinder twin-cam unit. In 1967, the Duetto was replaced by the 1750 (1779cc) Spider Veloce and in 1968 the largely very similar but lower-priced and lower-powered 1300 Junior was added to the increasingly popular range.

'WAN 82G' hails from 1968 and features White bodywork contrasted by Black vinyl upholstery. It is one of just 266 such models equipped with right-hand drive and is these days powered by the 1750 engine from an early 1970's Alfa. The two-seater currently displays an unwarranted 39,975 miles and is said by the vendor to be 'a nice car that drives as well as it looks', and he presently grades the bodywork, paintwork and five-speed manual transmission as '8/10'. Offered complete with history file comprising of invoices, old MOTs plus the original owners' manual and service book 'WAN 82G' will be offered with a fresh MOT certificate by the time of sale.
Share: