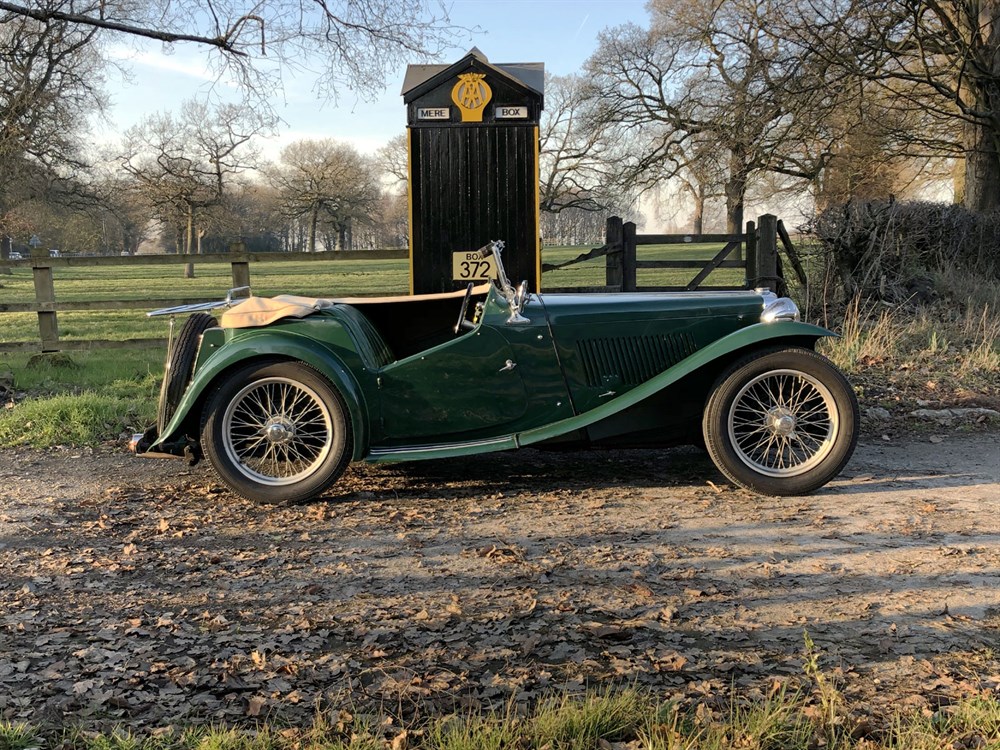 
This delightful TC has remained in the current ownership since 2004, prior to which it spent many years as part of a private collection. It has covered just 5,750 miles since 1977, bringing the recorded total to an unwarranted but eminently credible 37,800 from new. The vendor has no hesitation in describing the bodywork, Green paintwork, Green leather interior trim, correct XPAG engine and four-speed manual transmission as all being in 'very good order', and is now offering the MG complete with hood and tonneau cover, its original registration number, buff logbook from 1956, MOT records from 1977, instruction manual, parts catalogue and a pair of keys.

MG's venerable T Series range began with the TA of 1936. More gentle evolution than revolution, the ensuing range furthered the concept of a simple body-on-chassis, two-seater sports car embodied by the outgoing PB. The TC was announced within five weeks of the end of WWII and the first 81 cars were completed by the end of 1945. The newcomer featured the familiar dual-cowl dashboard, fold-flat windscreen, cutaway doors, swept wings and rear mounted spare wheel of its predecessor. The major change was the welcome 4in increase in the width of the cockpit. Other refinements included: improved sidescreens, the replacement of the twin six volt batteries with a bulkhead-mounted 12 volt one, the fitting of hydraulic lever arm dampers, and improved mountings for the semi-elliptic leaf springs - the rubber bushes of which made for a smoother, quieter ride. Power came from MG's proven 1250cc OHV XPAG unit mated to a four-speed manual gearbox. A slight rise in compression ratio lifted the power output to 54.4bhp, endowing the TC with a top speed of almost 80mph. Though only available in RHD, it was exported worldwide, with exactly 10,000 examples produced before the model was replaced by the TD in 1950.


The vendor has described the condition as follows: