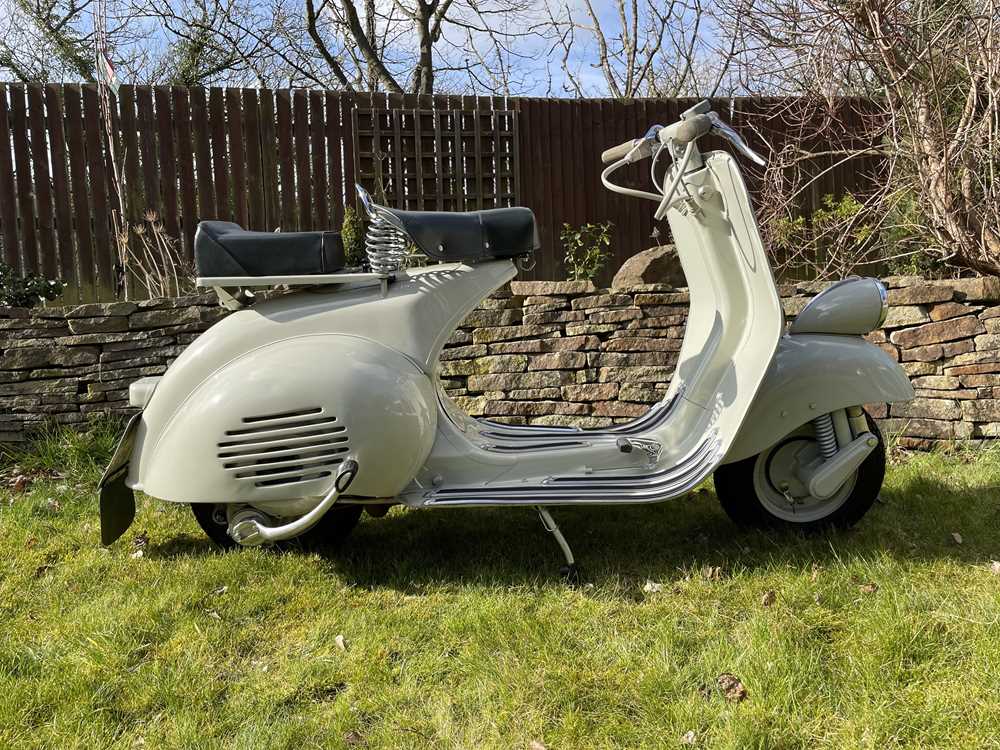 The Piaggio industrial group was devastated by the consequences of World War 2. Amongst the projects muted to rescue the company was an idea to help mobilise the Italian public with a new transport concept ‘The motor scooter’. This was inspired by the Cushman scooter of Nebraska USA as used by the US paratroopers and seen in the Italian campaign of WW2. Aeronautical engineer Corradino d’Ascanio, normally associated with inventing helicopters, was given the job of designing the scooter. D’Ascanio did not like motorcycles and designed the new vehicle from scratch with a vision for clean reliable personal transport for both men and women. During trials the buzzing noise of the engine and body shape combined for the scooter to be christened the ‘Vespa’ the Italian translation for wasp. From the first appearance of the Vespa in 1946 it was such a success that it has become a symbol of taste, fashion and style and one of the favourite global design icons of all time. In late 1953 the VM2T was launched as a successor to the VM1T which had had a completely new ‘twin-port’ engine to the previous models. This afforded slightly more power than pre-1953 models and was also known as ‘square’ because the bore and stroke dimensions were equal at 54mm x 54mm. A slightly larger rear light than the VM1T was fitted and an extra position on the light switch for a parking light. The quickest way to spot a VM2 is the red gem on the mudguard light. The colour of Vespas main line scooters changed from green to grey in 1953. The VM2T was an extremely successful model and over 90,000 were made. They were not sold in Great Britain and are a rare sight in the UK. In Italy they are highly prized and command ever more substantial prices in good condition.

This extremely well restored example was produced in 1954 and has been the subject of a professional restoration. We can tell this for example by the way the foot running strips have been fitted using the correct workshop tools. The new cables have been finished and cut to factory standard. The panels fit very nicely and the paint is largely unblemished. Wherever possible the original parts have been re-furbished and used. The engine has been re-built as standard with an original carburettor and has good compression. Mechanically elsewhere the brakes and suspension feel correct and are in as new working condition. This scooter is an excellent example of a design icon. Together with the certificate of origin from Piaggio she represents a terrific investment in a model that has been fast appreciating in recent years. The twin-port engine on the VM2 is also much revered by enthusiasts who want to go faster. There are numerous kits on the market that can be used with the original engine casing thus not interfering with the classic appearance of the engine. A museum piece and a rare opportunity, particularly in the UK for any serious collector of Vespas.