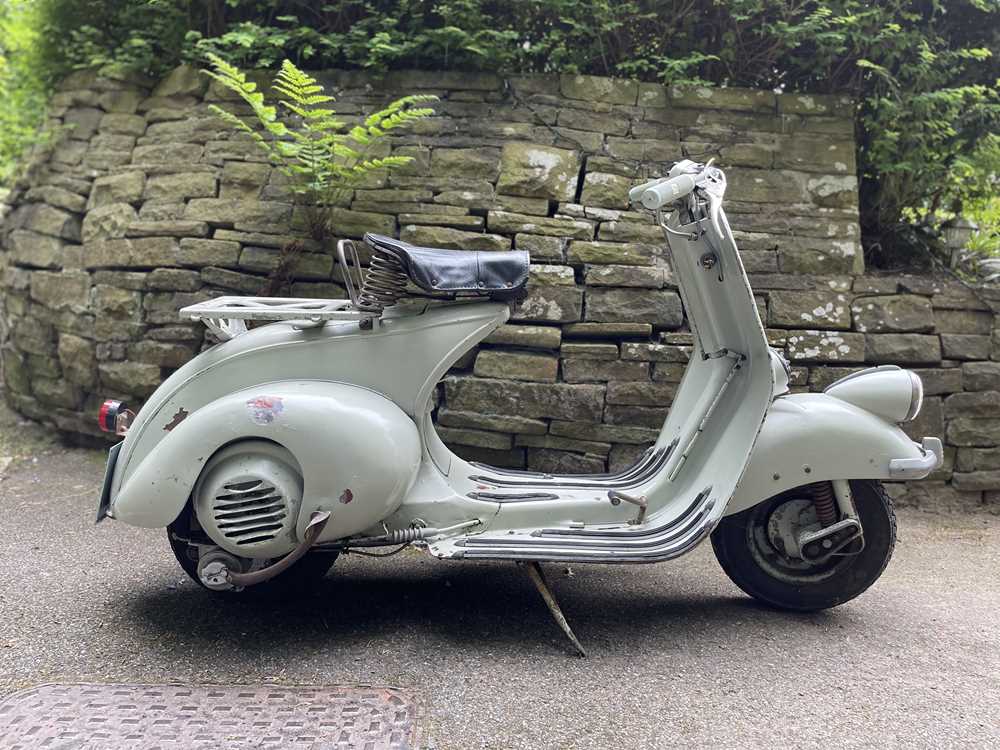 The Piaggio industrial group was devastated by the consequences of World War 2. Amongst the projects muted to rescue the company was an idea to help mobilise the Italian public with a new transport concept ‘The motor scooter’. This was inspired by the Cushman scooter of Nebraska USA as used by the US paratroopers and seen in the Italian campaign of WW2. Aeronautical engineer Corradino d’Ascanio, normally associated with inventing helicopters, was given the job of designing the scooter. D’Ascanio did not like motorcycles and designed the new vehicle from scratch with a vision for clean reliable personal transport for both men and women. During trials the buzzing noise of the engine and body shape combined for the scooter to be christened the ‘Vespa’ the Italian translation for wasp. From the first appearance of the Vespa in 1946 it was such a success that it has become a symbol of taste, fashion and style and one of the favourite global design icons of all time.

In 1948 the V1T was launched as the first 125cc model and as a successor to the earlier 98cc models. The 1948 version had several major changes to the 98 with the steering moved from the left of the front wheel to the right, and numerous technical and visual changes including the colour change Metallic Green. The 1950 V13T did not add many modifications to the 1948 version except the partial covering of the rod-controlled gear mechanism, improved cooling fins on the cylinder and a central stand was used.

This extremely early 1950 model was produced between March and May of that year and we know this by the new found records of Paulo Zanon and his cross referencing of the Piaggio archives. She was re-painted in the late 1950’s from the original green metallic colour to the grey Vespa colour of later models. This was a common practice for owners who wanted to make their scooters look newer. She still has the curved stand feet and the other features of the earlier 1948-49 V11T model, notably the crimped body lines. She is very original except the paint. We noticed the original and valuable Piaggio Genova badge, original exhaust and seat and a very valuable Silma Fuel gauge accessory and front bumper. The engine has been mechanically overhauled and we are told she was a running scooter when last used. There is a bill present that shows the parts and work done to a cost of 1600 euros. The original fuel tap has been by-passed by a replacement at the carburettor but is present and could be reinstated.

The current owner, a former member of the Vespa Club of Milan has had the scooter since 1998 and attended rallies in Italy on this machine. He is an Italian national who brought the scooter with him when he relocated to England five years ago hence it has not been known in any collectors circles in the UK until now. The owner informs us that she is running well.

This is a very old Vespa, almost certainly in the top 10 oldest in the UK, and produced long before Douglas started production in Great Britain under license in March 1951.