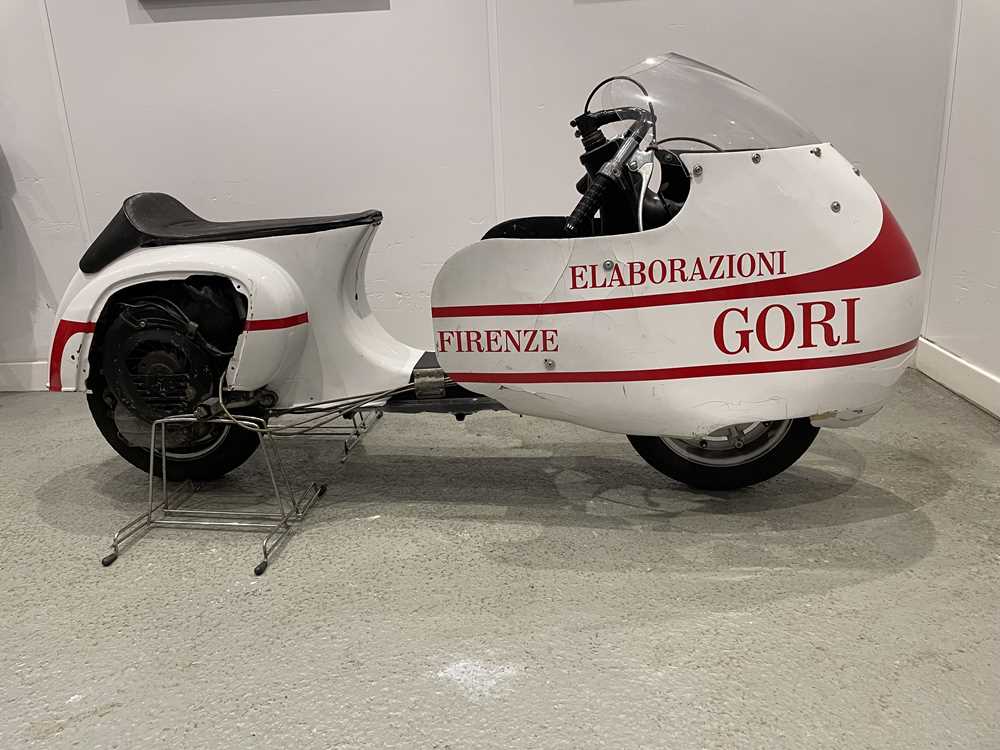 The Piaggio industrial group was devastated by the consequences of World War 2. Amongst the projects muted to rescue the company was an idea to help mobilise the Italian public with a new transport concept ‘The motor scooter’. During trials the buzzing noise of the engine and body shape combined for the scooter to be christened the ‘Vespa’ the Italian translation for wasp. From the launch in 1946, it was such a success that it has become a symbol of taste, fashion and style and is one of the favourite global design icons of all time, the Vespa.

Giancarlo Gori and his father Vasco opened their scooter sales and tuning centre in 1958 in Florence Scuderia Gori. They were an official Lambretta dealer but unlike other dealers they uprated the performance of standard machines and were converting motorcycle owners to tuned Lambretta scooters. Legend has it that they were involved in illegal night street races to prove the speed of their machines. In 1965 Gori tuned a Lambretta TV175 series 3 which officially reached a speed of 170 km/h at the Autodromo di Monza. The style was cast with a large bullet fairing in white with red livery.

Giancarlo Gori then turned his attention to Vespas. He had already been selling 75cc tuning kits for Vespa 50cc models and was experimenting with the Primavera 125. However, when the Vespa SS90 appeared on the market in 1966 this was a game-changer and the SS90 Gori racer was born which then elevated tuning Vespas to the extreme. Vespa SS90 machines are recognised for their special engineering qualities.

With its Gori bullet fairing and screen and on a lowered Vespa 90 chassis and using a 100cc Saetta karting cylinder. The racer featured a rev counter, adapted steering, drop handlebars and still has the special side stands made for it at the time. This one is the actual machine raced in Elvington, England in 1967 that achieved the 151 km/h (94 mph) record. This machine has had so much written about it over the years and many articles can be found online.

Gori tuning and performance products have sold well over the years, but the business was acquired by Pinasco in 2020 who are now successfully taking Gori products into the modern commercial Lambretta and Vespa mainstream performance scooter market and onto a new level. An unprecedented opportunity to acquire an unrivalled part of vintage scooter racing history.