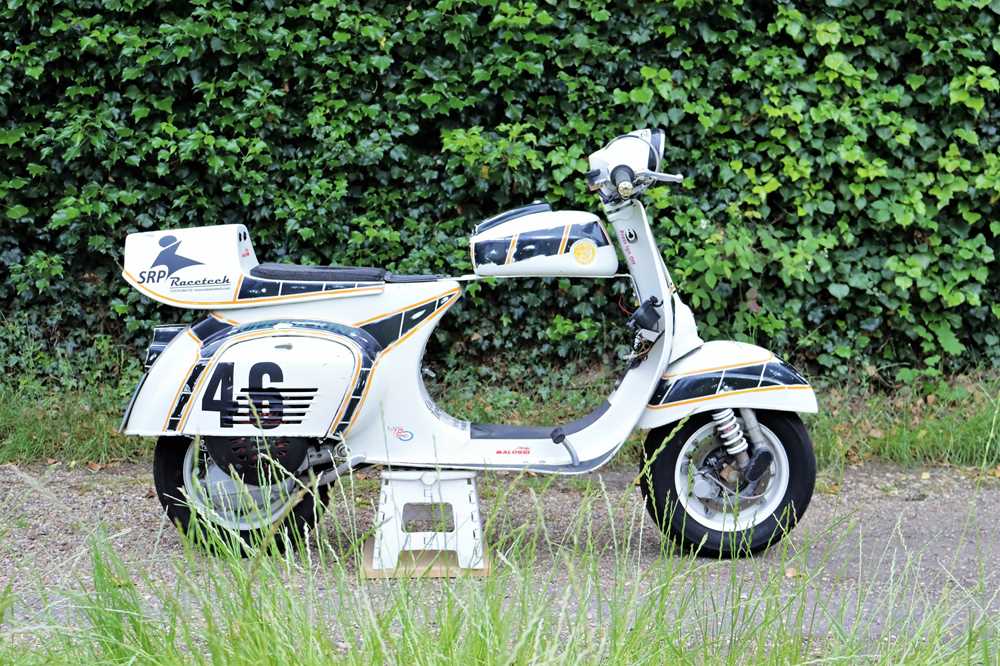 'NK1’ is a small frame Vespa racer with an outstanding pedigree and the winner of consecutive British Production Class Championships.

The unstamped frame was bought from Douglas (Vespa importer to UK) when they ceased trading by scooter racing legend and President of VCB, Norrie Kerr, who built it up to compete in grass-track/scramble events. As circuit racing became the primary scooter sport, it returned to storage whilst Norrie concentrated on his well-documented racing career until he donated the frame to this project: build a small frame racer to production specs & see how it fares against the ubiquitous larger 200cc machines.

Given the full works by the legendary Hodge at Supersprint Restorations with all new forks & SS bodywork fitted - every component brand new genuine Vespa, or a superior quality race alternative wherever the rulebook allowed - the outcome was a spectacular pearl and candy apple finish, with distress worked into the paint to give an ‘80s survivor’ look: an homage to the original Team Vespa machines.

The engine was equally built using all new parts, genuine, or superior race parts wherever rules permitted, with the exception of the casings; engine builder and rider, Team Vespa stalwart David Delaney, wished to bring an old set back to life.

Not only does it have stunning looks, winning several trophies and awards at custom shows where it was displayed, but also outstanding performance and handling: Delaney & NK1 won both British championships entered as well as chalking up many race wins, pole positions, and fastest laps elsewhere.

The scooter, now with the typical patina of a race machine, is exactly as last raced, complete with marks from dropped spanners and a scuff on the left rear quarter earned on its very last race at Lydden Hill. Late for qualifying, Delaney started from the back of the grid, remarkably working his way through the entire field until he took the lead, but didn’t know and maintained the same pace, losing the back end at the Devil’s Elbow on the last lap. The battle scars are very much part of the history and appeal of the machine – few survive, and this outstanding example now deserves to be preserved in a collection.