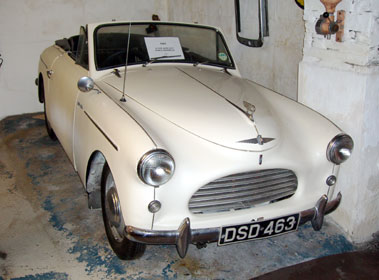 In 1950 Austin took the bold step of introducing the A40 Sports, based on the A40 Devon. Styling was by Jensen's Eric Neale, and in effect, this Austin is something akin to a `baby' version of the original 1950s Jensen Interceptor. Indeed, examples are welcomed at Jensen Owners Club events, owing to the fact these Austins were built under sub-contract at Jensen's West Bromwich coachworks. An A40 Sports is more of a convertible than a sports car, though it featured twin carburettors to add a little spice to the Devon engine's performance. Aluminium bodywork was fitted to the Devon chassis, and developments of the `Sports' mirror those of the range on which it was based. GD2 versions arrived in November 1950 with a floor-change gearbox, and the full GS2 Devon dashboard. By August 1951, fully hydraulic brakes were added, along with a column-change for the gears, and a re-styled dashboard. As a niche model, the A40 Sports worked for Austin, though high hopes for large-volume sales in America proved a pipe-dream (indeed fewer than 650 found homes on the other side of The Pond). In Britain, about 2500 were sold during the three years the model was produced, but survivors are now rare. The A40 Sports features separate chassis construction and a basic 1200cc ohv engine. The simplicity of the running gear means that re-commissioning this Austin should be a relatively easy task. This car is fully eligible to join the Austin A40 Sports Register.

This example is finished in Old English White with black upholstery and white piping. It has been on static display as part of a private Lake District collection since acquisition on 23rd August 2005. Although reported to have been driven into the collection building under its own power, the Austin is currently a non-runner. Sold strictly as viewed it is accompanied by V5 / V5C Registration Documents.
Share: