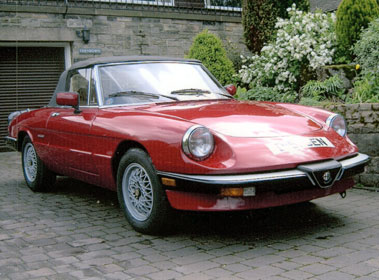 Introduced to the North American market in 1985, the facelifted Quadrifoglio Verde (Green Cloverleaf) Series 3 version of Alfa Romeo's long-lived Spider was visually distinguished by new front / rear spoilers, sideskirts and mirrors. Mechanically identical to its Spider Veloce predecessor, the QV was equipped with all-round coil-sprung suspension, precise steering and four-wheel disc brakes. Powered by a Bosch fuel-injected 1962cc twin-cam engine allied to five-speed manual transmission, it boasted 120mph performance. The Graduate was a less luxurious but more affordable derivative, intended to appeal to a younger audience - hence the reference to the 1967 film starring Dustin Hoffman and Anne Bancroft. It benefited from cleaner, less fussy styling and a rawer feel that drew comparison with the original Duetto Spider. Riding on steel wheels as standard, it remained in production until 1990.

This particular example, now riding on a set on multi-spoke alloy wheels, was converted to right-hand drive by Ellisons of Hull in 1991, and first UK registered on June 5th that year. From then on the story is of one of ongoing care; shortly afterwards it received new front discs; the headlights were rewired in January 1994 and there was a new fuel tank fitted in 2003. It received a new clutch at an indicated 47,696 miles and new rear axle bearings 300 miles before that. The mileage now stands at an unwarranted 48,800. The car has seen light use in recent years and the vendor describes it as being in 'A2' condition with regard to its engine, five-speed manual gearbox, electrical equipment, interior trim, bodywork and paintwork. Though, he notes the heater fan is not working.