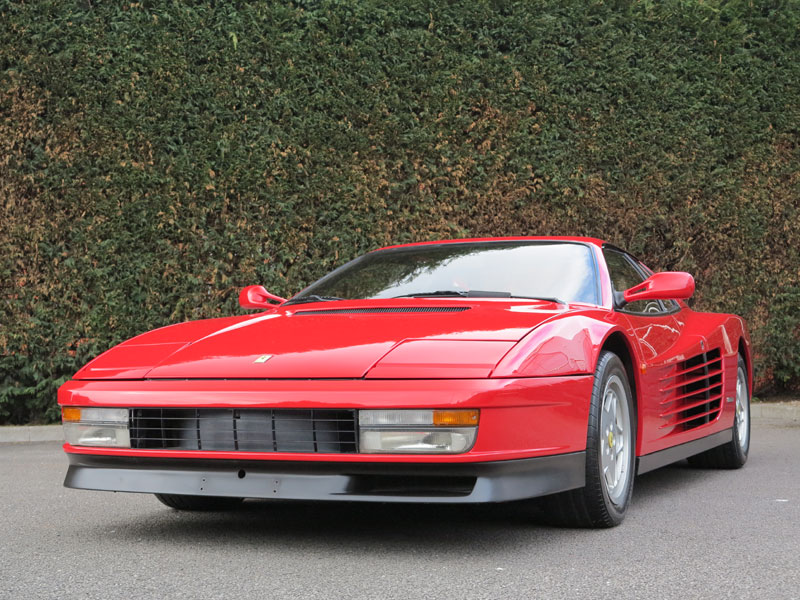 Introduced at the 1984 Paris Salon, the Testarossa caused a sensation. Developed with the aid of a wind tunnel it combined a low drag coefficient with impressive negative lift characteristics (hence the lack of extraneous aerodynamic aids). Although, it was built around a similar tubular steel matrix and retained the same mid-engined layout as its Berlinetta Boxer forebears, the Testarossa was more than just a simple evolution. Its use of galvanised steel for the doors, roof and bulkheads promised greater longevity (the rest of the bodywork was formed in aluminium), while a longer wheelbase, wider track and revised all-round double-wishbone coil-over suspension promoted better handling. As well as greater interior space, drivers also benefited from an adjustable steering column, re-profiled seats and air conditioning. Extensively reworked, the 4942cc flat-12 was lightened by 20kgs and featured ellipso hemi-spherical combustion chambers, four-valve cylinder heads and Bosch KE-Jetronic fuel injection. Developing some 390bhp and 362lbft of torque, it was mated to a five-speed manual gearbox but kept in check by twelve-inch discs all-round (gripped by four-pot callipers) and a limited slip differential. Highly praised by the contemporary motoring press, Autocar magazine found the Testarossa capable of 181mph and 0-60mph in 5.3 seconds. Predictably exclusive, production totalled 7,177.

This 1990 left hand drive example is finished in traditional Rosso Corsa and trimmed in Black leather. We are told the Ferrari has formed part of a well maintained, extensive Japanese collection for many years and has recently arrived on these shores and has been Nova registered. This iconic 80's supercar currently displays 70,445 kilometres (approximately 43,772 miles).

PLEASE NOTE: Should this lot remain in Europe, it will be subject to VAT (20%) on the full purchase price (both the hammer price and the commission).