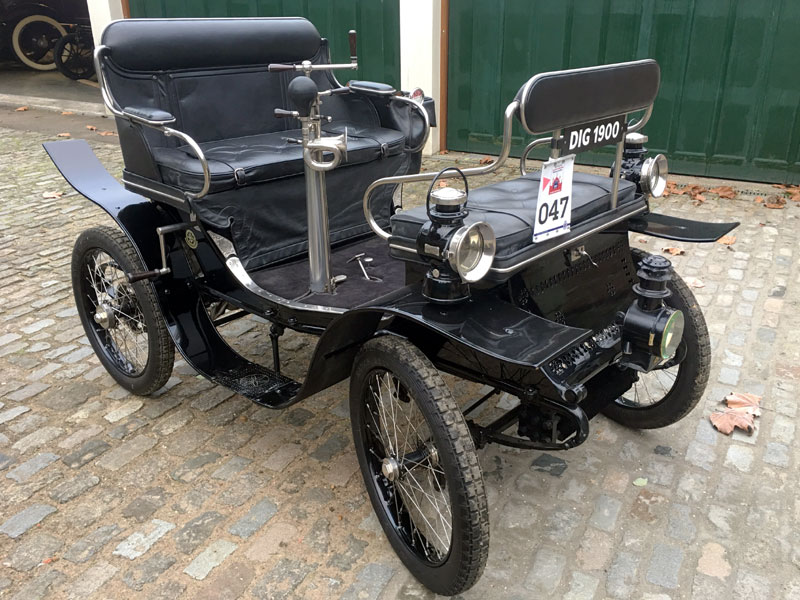 This delightful veteran was unearthed in mainland Europe in the 1990s and treated to a thorough restoration, during which the original 3.5hp engine was replaced by a 1901 4.5hp one in order to enhance the performance. The fitment required modest modifications to the base of the steering column to accommodate the 'decelerator' pedal common to the later engine, otherwise the car was unaltered and now capable of a sustained 25mph for the first time. On completion it was enjoyed in its then home country of Holland before being exported to the USA in the early 2000s, where it resided in private collections until brought to auction in Massachusetts in 2009. It was at this point that it came to the UK, where it was once again put to good use - 'DIG 1900' last completed the London to Brighton Veteran Car Run in 2014. The minimal immaculate bodywork is finished in Black while the seating is trimmed in Black leather and the once white-walled tyres have been replaced with Black ones. The vendor regards the vis-à-vis's bodywork, paintwork, seating, single-cylinder 402cc engine and two-speed transmission as all being in 'excellent' condition. He is now offering the De Dion complete with Veteran Car Club dating certificate, which guarantees it a welcome in veteran events the world over, and a potentially early start on London to Brighton Runs - an event in which it has already proved its mettle.

Count Albert De Dion was involved with the horseless carriage from 1882 and his first internal combustion-engined offering was a diminutive tricycle powered by the company's new vertical single-cylinder engine, which was notable for revving at almost twice the speed of the contemporary Daimler unit. The four-wheeled Voiturette first seen in 1899 introduced the world to the innovative De Dion rear axle, which was way ahead of its time.
Share: