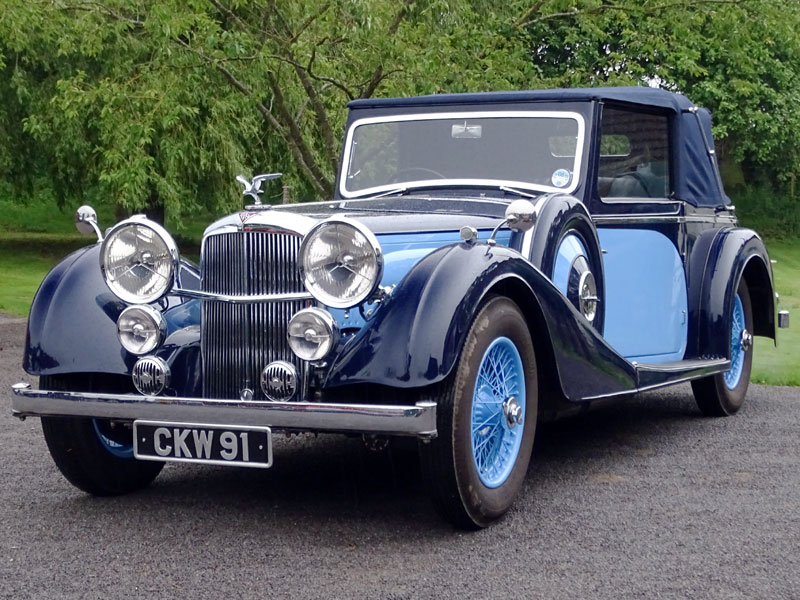 "In the Alvis Speed 25 the makers have produced a car which will delight those who appreciate fast motoring with an ample margin of safety. A very quick response to the accelerator is matched by exceptional steadiness under heavy braking conditions, light and accurate steering, and road holding of that special quality which is so rarely encountered these days" (Speed 25 Road Test, Motorsport 1936).

Supplied new via B. Waterhouse & Sons Ltd of Bradford (or so its locally issued 'CKW 91' number plate would imply), chassis 14591 began life as a Charlesworth-bodied Sports Saloon. Surviving World War Two, the Alvis was registered to Hinde & Lewis of Wolverhampton on 25th October 1948. Acquired by Henry Winfield Ltd of Hemel Hempstead on 12th August 1954, the Speed 25 SC remained with them until January 1965 when it was sold to Colin Holloway of Surrey. A keen member of the Alvis Owners Club and Vintage Sports Car Club, Mr Holloway attended numerous events aboard 'CKW 91' as well as using it as an everyday car. Invited to represent Alvis in an 'All Makes' parade at Brooklands, the Speed 25 SC underwent some bodywork renovation and a colour change from Blue to Blue over Black during 1969. Laid-up in a barn some six years later due to a cracked exhaust manifold, 'CKW 91' entered the current ownership during October 2002.

Relocating to the vendor's North Yorkshire workshop after slumbering for decades, the Alvis was completely dismantled. Shot blasted and repainted, the chassis was fitted with a new petrol tank and wheel bearings and also had its back axle, suspension and brakes refurbished. The original engine was overhauled via a crankshaft regrind, re-metalled bearings and fresh pistons etc. The associated ancillaries were rejuvenated too. A comprehensive rewire was carried out and the four-speed all synchromesh gearbox found to need nothing more than an oil change. On examination the Charlesworth Sports Saloon body proved to be in a very sorry state with rotten woodwork, badly corroded aluminium door pillars and the wings being held on with many wood screws to gain a purchase in the decaying timber frame. The decision was taken to have a new drop-head body crafted by The Carrosserie Company (UK) Ltd which they also painted and installed. The upholstery was renewed and a new lined hood fitted. All the brightwork was re-chromed. The total cost of the restoration was in excess of £140,000. Accompanying paperwork encompasses two continuation buff logbooks and assorted restoration photographs.