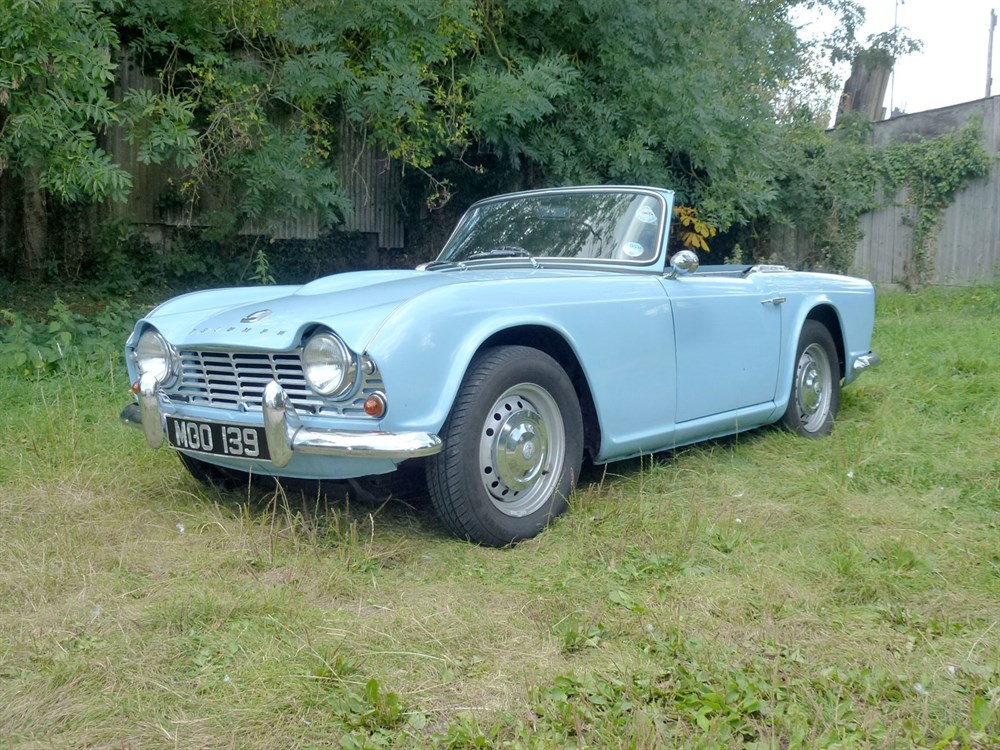 - Recent mechanical check over, it is expected that a fresh MoT will be obtained prior to the auction

Affectionately known as 'Moo', this Powder Blue example has been owned by its nurseryman and keen saxophonist vendor from new. Having much enjoyed owning a TR3, he was considering an Austin-Healey 3000 as a replacement when he saw the new TR4 displayed at the London Motor Show in 1961. Discovering he was unable to fit his baritone saxophone in the boot of a Healey he purchased the Triumph from his local garage in April 1962 on favourable terms whilst going out with the owner's daughter. A number of girlfriends were then courted in the car before he married his wife who enjoyed driving Moo as much as he did (and still does!). The needs of a growing family forced them to look for a four-seat convertible and when a Lancia Beta Spyder became daily transport in 1977 Moo was laid up. Around 1984 it returned to the road with the intention of replacing some panels but business pressures intervened and by 1990 the TR4 was back in storage where it remained for the next 20 years.

However, whilst performing at the Panshanger Revival the vendor met some fellow TR enthusiasts who recommended a restoration company and the car was delivered to them. Unfortunately, in 2012, with work in mid flow they went into administration and Moo had to be retrieved before being sent to renowned Triumph specialist Robsport for completion. By July that year the finished car was back with the family and being enjoyed once more. Sadly, due to the owner's failing eyesight the time has finally come to find a new home for it. Offered with two albums of photographs, original buff logbook, Swansea V5c and other assorted paperwork, this is an incredibly rare opportunity for collectors to acquire a genuine one owner example with a known history from new.