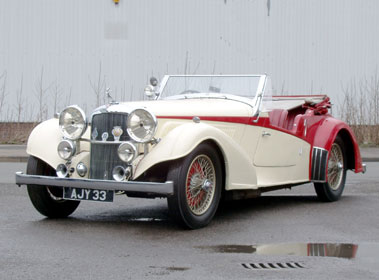 "The general appearance suggests a real thoroughbred . . . this car is capable of a truly remarkable performance, but the manner in which this is achieved makes the Alvis doubly likeable. The independent front suspension and one of the most satisfactory steering systems which we have yet encountered make road holding particularly good . . . The all-synchromesh gearbox plays a very big part in the high averages which are so readily achieved with this car . . . the six-cylinder engine shows itself to be most docile at low speeds . . . Owing to the high top gear the engine spends a great deal of its life at speeds well below its peak. Consequently there is a material absence of noise or vibration; experience shows that a 300 mile journey is no more tiring than when undertaken in a first-class railway compartment" (The Motor, June 23rd 1938)

Unveiled in August 1936, the 4.3 Litre was the undoubted flagship of Alvis' pre-WW2 range. Based on a sturdy, cruciform-braced ladder-frame chassis equipped with independent transverse-leaf front suspension and a well-located `live' rear axle, the newcomer also boasted driver-controlled Luvax shock absorbers, Marles cam-and-roller steering and Clayton Dewandre servo-assisted drum brakes. An enlarged version of that found in the Speed 25, its 4387cc OHV straight-six engine featured a seven-bearing crankshaft, alloy crankcase / sump, cast-iron cylinder block / head, triple SU carburettors and cluster valve springs (nine per valve making for 108 in total). Credited with developing some 137bhp and 175lbft of torque, this potent unit was allied to the marque's famous all-synchromesh, four-speed manual transmission. Reputedly faster than the equivalent Lagonda V12 and Bentley 4.25 Litre both in terms of acceleration and top speed, the Alvis 4.3 Litre was judged something of a `supercar' in period. Available with a choice of 10ft 7in or 10ft 4in wheelbases and in a variety of open and closed guises, it remained in production until 1940 by which time some 166 are thought to have been made (though, some sources suggest the figure was 183 or 198 cars).

However, one Alvis 4.3 Litre model stands head and shoulders above the rest in terms of rarity, desirability and reputation. Introduced in late 1937, the Short Chassis Vanden Plas Tourer drew rave reviews from the contemporary motoring press. A true expression of the coachbuilder's art, the rakishly elegant four-seater was awash with fine detailing. As well as expected elements such as a fold-flat windscreen, encased spare wheel, sloping tail, louvered bonnet sides and cut-away doors etc, the design was punctuated by a clever belt line that emphasized its low build and delightful stepped edges to all four wings. Riding on Alvis' `jelly mould' wire wheels and typically finished in a two-tone livery, the 4.3 Litre Short Chassis Vanden Plas Tourer was arguably among the best looking road cars of its generation. While period road test figures - 0-60mph in 11.3 seconds and 103.45mph top speed - confirmed it to be one of the quickest too. Some £200 less expensive than a standard wheelbase Vanden Plas `Razor Edge' Saloon (£995 vs. £1,195), the short wheelbase Vanden Plas Tourer attracted surprisingly few sales. Indeed, it has long been held that just twelve Alvis 4.3 Litre Short Chassis Vanden Plas Tourers were built and supplied (eleven of which are known to have survived to this day).

This particular example - chassis number 14320 - is generally recognised to be the first of the twelve constructed. A supposition supported by the copy Car Production Record on file which states that its chassis was "built under EXP: 2033/210. See D.O. (CAR)". Finished in Black over Red (Black front wings, Red rear wings, black painted wheels) with Red leather upholstery, it was despatched to Messrs Mumford Ltd of Plymouth on 22nd December 1937. Although, two sister cars (chassis 14330 and 14340) had already left the Works by then, it is believed but not warranted that chassis 14320 was held back for development and publicity purposes. Road registered as `AJY 33', the Alvis was sold new to W.G. Whitford Hawke Esq of Plymouth. Reportedly acquired by the Mather-Lees family about the time that World War Two broke out, it was to remain in their keeping until 1966 (we are indebted to Michael Mather-Lees Esq for his permission to reproduce the black and white photograph which accompanies this description). Curiously the Tourer's Factory Guarantee Card indicates that it belonged to C.J. Fulton Esq. of Oxted, Surrey in April 1950 but he may perhaps have been the young serviceman shown in the black and white image who was brother to Mr Mather-Lees mother.

Passing through the hands of Kearns at Alfrick (nr Worcester) thereafter, chassis 14320 was in the possession of Birmingham restorer Olaf P. Lund Esq by early 1971. Writing to the Alvis Owners Club Bulletin, Mr Lund commented that upon acquisition the car was "very scruffy and part dismantled but complete". Suitably refurbished in grey over red and fitted with a correct type but replacement engine (number 14211 in place of number 14783), the 4.3 Litre Short Chassis Vanden Plas Tourer was displayed at the International Alvis Day on 7th May 1972 where it was photographed by current Alvis Owners Club 4.3 Litre Registrar, Wayne Brooks Esq. Purchased from Mr Lund by The Hon. Geoffrey Hazlitt Wilson of Newton Valence, Hampshire in 1973, chassis 14320 won an award at the following year's International Alvis Day (again held at Crystal Palace) before being traded-in to Peter Harper Esq of Stretton against a Bugatti Type 44 sometime during 1976. Entering the current family ownership via Mr Harper, the Alvis has formed part of an impressive private collection for many years. Repainted in cream over red at some stage, it presents as an older restoration.

Said to have been in running order until recently, it is hoped but not promised that the Tourer will have been resuscitated by the time of the auction. A truly historic Alvis - The First of the Twelve - and one of the most important roadgoing Post Vintage Thoroughbreds that we have ever had the pleasure of offering for sale, this glorious 4.3 Litre Short Chassis Vanden Plas Tourer would grace any of the world's finest collections. Or as The Autocar magazine put it "In the scheme of things there are cars, good cars and super cars". Falling definitively into the latter category, `AJY 33' is accompanied by the aforementioned copy Production Car Record, green continuation logbook, V5 / V5C Registration Documents and sundry AOC 4.3 Litre Register notes.

H&H are indebted to Wayne Brooks for his generous help in compiling this description.
Share this page: