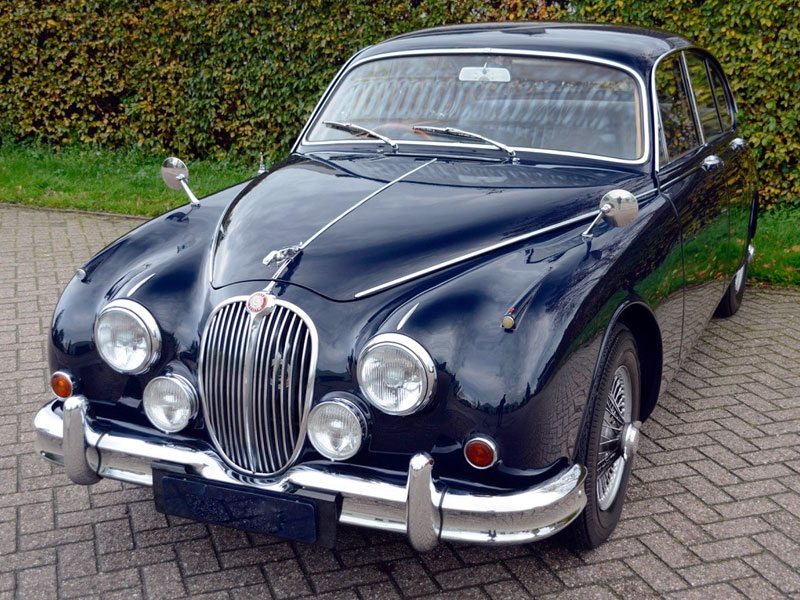 Few would argue that the ultimate specification for a MKII Jaguar includes the 3.8-litre engine teamed with a manual gearbox plus overdrive. This home market example from 1967 ticks those boxes and more, as it also features power assisted steering, limited slip differential and an improved transmission. Finished in Dark Blue and trimmed in Grey hide, it was apparently stored from 1978 to 1988, at which point a two phase restoration was commenced, the final stage of which was carried out by Vicarage Motors. Since 1993, the MKII has resided in the Netherlands and its keeper throughout those years currently grades the bodywork, paintwork, XK engine and overdrive gearbox as 'very good' and the interior trim as 'good'.

Featuring notably slimmer roof pillars than its MKI forebear, the immortal Jaguar MKII was as airy on the inside as it was elegant on the outside. Its monocoque bodyshell was equipped with independent coil-sprung front suspension and a well located live rear axle, 12 inch disc brakes all round and recirculating ball steering. The model could be specified with a 2.4, 3.4 or 3.8-litre version of Jaguar's race-proved, DOHC inline, six-cylinder XK engine. The interior was quintessentially British with its sumptuous leather-covered seats, polished wood facia and door cappings, comprehensive instrumentation and impressive row of auxiliary toggle switches. The attention to detail and build quality of the MKII were remarkable for the price being asked (just £1,779 0s 10d including taxes even for the 3.8) - these cars punched above their weight. Equipped with the 220bhp 3.8-litre engine, the Jaguar was capable of sprinting to 60mph in as little as 8.5 seconds and on to a top speed of 125mph. It was also extremely popular with the general public, bank robbers and the police alike, outselling its smaller-engined siblings, with 30,141 being produced between 1959 and 1967.