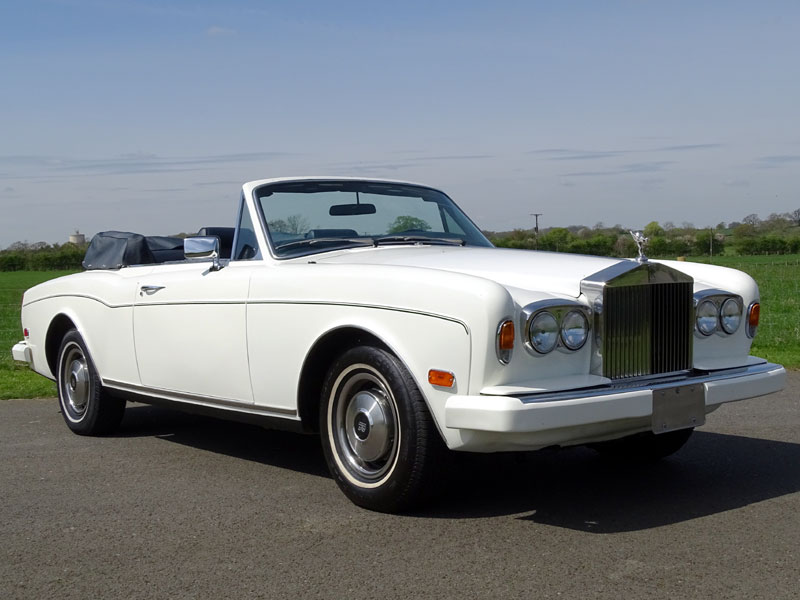 - Displaying a credible 74,700 miles and fitted with refurbished steering rack

- Recently subject to fuel injectors, pipework, two tyres and the hood being replaced

Rolls-Royce registered the Corniche name in the 1930s and apparently assigned it to a prototype based on the Bentley MK V, but the model was never progressed due to the onset of war. The moniker was finally first employed in 1971 on the Coupe and Convertible versions of the Silver Shadow. In common with the Shadow, the newcomer was penned by in-house designer John Polwhele Blatchley and the underbody and floorpan crafted by Pressed Steel Fisher. Initial assembly (including alloy bonnet, bootlid and doors) was then carried out by Mulliner Park Ward. At this stage the cars were transported to the main factory in Crewe for the installation of the running gear before returning to London for the trimming, painting and finishing. Power was provided by the company's long-standing 6.75-litre V8, that was mated to a GM Turbo Hydramatic 400 three-speed automatic transmission. Suspension was independent by coil springs all round, augmented by a Citroen-originated hydraulic self-levelling system. Braking was by discs, with ventilated units phased in for 1972. The model received a mild update in 1977, when alloy and rubber bumpers replaced the earlier chromed items and new style wheel rims and reversing lights were fitted. Under the bonnet, an aluminium radiator was adopted and an oil cooler added to the specification, while changes to the passenger compartment concerned newly-designed seats and refashioned facia.

This lefthand drive Corniche was purchased by the vendor in New York in November 2015. Since using the car in the US he has had the fuel injectors, pipework, two tyres, the hood all replaced, the dashboard repaired and `URM 702X' serviced. Further benefitting from a refurbished steering rack and brake pump the Rolls is offered with a collection of invoices and a no-advisory MOT into December 2017. Displaying a credible 74,700 miles the vendor currently grades the paintwork, bodywork, interior, engine and gearbox as `very good'.