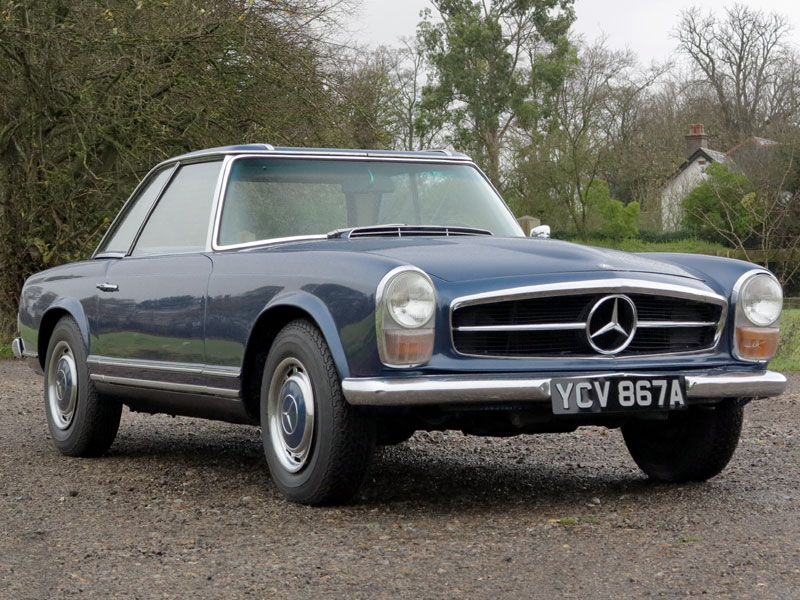 - 1 of just 1,465 examples built during the Pagoda's launch year

Successor to both the exotic racebred 300SL 'Gullwing' Coupe and its humbler 190SL sibling, the W113 series SL proved more comfortable than the former and faster than the latter (a point emphasised by Eugen Bohringer's 1963 Liege-Sofia-Liege rally victory). First of the line, the 230SL was introduced at the March 1963 Geneva Salon. Penned by Paul Bracq, its wonderfully crisp styling clothed a monocoque chassis equipped with all-round independent coil-sprung suspension and front disc brakes. Powered by a 2.3 litre straight-six engine mated to either four-speed manual or automatic transmission, the model was credited with 150bhp and 159lbft of torque. Reputedly capable of 124mph, it was praised by the contemporary motoring press for its performance, roadholding and refinement. Available in Californian Coupe, Convertible or Coupe Convertible guises, the last of these came with both a soft-top and the famous 'Pagoda' hardtop roof (so called because of its gently scalloped centre section).

A notably early 230SL, chassis 113.042-10-000585 was built during October 1963. One of only 1,465 examples completed that year, its specification included left-hand drive, four-speed manual transmission and a soft-top roof (though, the latter has since been removed). Thought to have spent a considerable time Stateside (hence its sealed-beam headlights) and previously owned by a Portuguese lawyer, the Mercedes-Benz was imported to the UK during summer 2015. Originally Black as denoted by the early-type body / paint code plaque affixed to its A-pillar, the two-seater has been repainted a striking Blue and uprated with a more potent 2.5 litre straight-six engine over time. Riding on steel wheels, 'YCV 867A' sports a Becker Europa Kurier radio, hardtop and Black part-leather upholstery. Starting readily upon inspection, this notably early 'Pagoda' is offered for sale with UK V5C Registration Document and MOT certificate valid until July 2016.