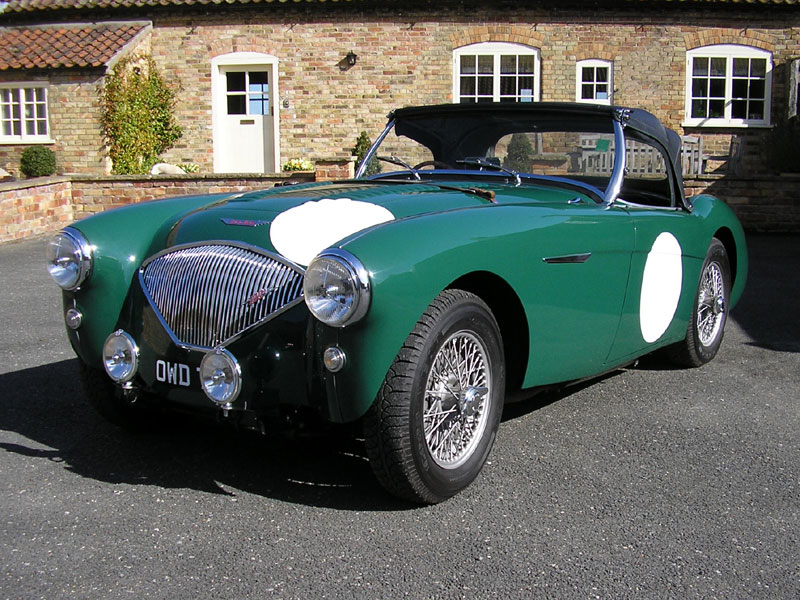 Donald Healey's eponymous company built a prototype two-seater sports car for display at the 1952 London Motor Show. It was based on Austin A90 Atlantic mechanicals and sported a sleek body designed by Gerry Coker and built by Tickford. It was dubbed the 'Healey Hundred' (a moniker chosen to reflect the car's ability to reach 100mph), and Healey planned to build production versions at his factory in Warwick. As things transpired, the prototype impressed the public and so excited Austin's Managing Director, Leonard Lord, that he agreed to build the car in volume at Longbridge. The newcomer was renamed the Austin Healey 100. The rest is history. The production bodyshells were made by Jensen and then transported to Longbridge where the cars were assembled alongside the A90. The early cars (code named BN1 and BN2) were equipped with the same four-cylinder 90bhp 2,660cc engine as the A90. They had 11" drum brakes all round. The front suspension was independent by coil springs while the rear featured a traditional live axle supported by semi-elliptic leaf springs. The steering was by cam and lever.

The home market BN1 on offer is a 1954 example that features smart Spruce Green bodywork complemented by Black interior trim and rides on silver-painted wire wheels. This particular 'Big' Healey has had four keepers to date and is the subject of an older restoration. The engine has been upgraded to 'M' specification ('M' spec. carburettors, cold air box, lightened fly wheel, uprated anti-roll bar, etc.) and the original gearbox replaced by the more desirable four-speed plus overdrive BN2 unit. 'OWD 726' has recently been treated to a full service by a marque specialist, and is described by the vendor as being 'well sorted' with 'excellent' bodywork and paintwork, and 'good' interior trim, engine and transmission. It is being sold complete with lead free conversion, Heritage Certificate, FIVA identity card and MOT until September 2016.
Share this page: