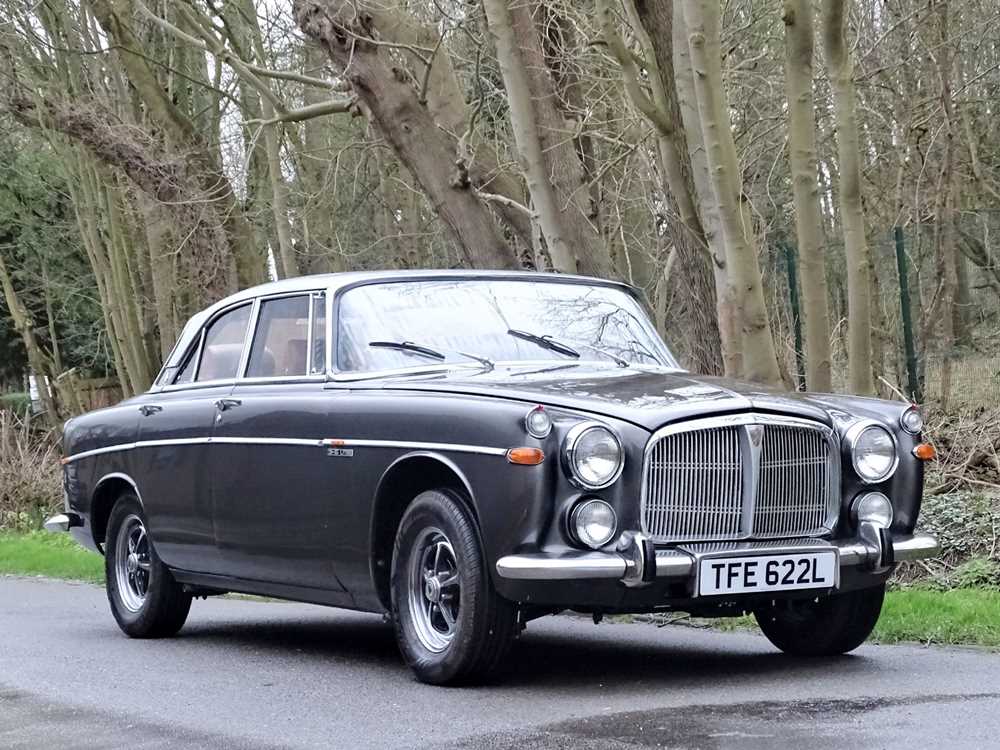 Finished in Aston Martin Cumberland Grey over Silver with sumptuous Italian Tan leather upholstery, this decidedly handsome P5B Coupe has not long emerged from an extensive restoration / upgrade programme designed to make it more usable and enjoyable on today’s roads. Carried out by NUA Motors of Harlow, work included a bare metal bodywork refurbishment and full interior re-trim plus the installation of a more powerful, fuel injected 4.0 litre Rover V8 and less ponderous four-speed automatic gearbox. Further benefiting from the addition of rear disc brakes, twin electric engine cooling fans, electronic ignition and air-conditioning, the four-seater had its brake, suspension and steering assemblies overhauled too. Summed-up by the seller as ‘a truly, lovely thing’, this subtly enhanced Rover is worthy of close inspection.

Although a marriage of expediency, the union between Rover's stately P5 model range and the ex-Buick 3528cc all-alloy OHV V8 engine resulted in an unexpectedly fine motorcar. Launched in 1967, the Rover P5B (or P5 Buick if you prefer) was conceived to stave off increasingly refined competition from the likes of Jaguar and Mercedes-Benz. Available in Saloon and Coupe guises - both of which employed four doors - the big Rover was equipped with independent torsion-bar front suspension, a leaf-sprung 'live' rear axle and disc / drum brakes. Fitted with three-speed automatic transmission and power-assisted steering as standard, it proved a relaxing drive. Though, with some 161bhp and 210lbft of torque on tap, it also boasted a 115mph top speed. Well-appointed in the best Rover tradition, the P5B’s 'gentlemen's club' interior made it a firm favourite with businessman, politicians (Harold Wilson's car was reputed to have a pipe rack in the back) and even HM The Queen who still owns her Arden Green Saloon. Production lasted until 1973 by which time 9,099 Coupes and 11,501 Saloons had been built. However, survivors are thought to only number in the hundreds.