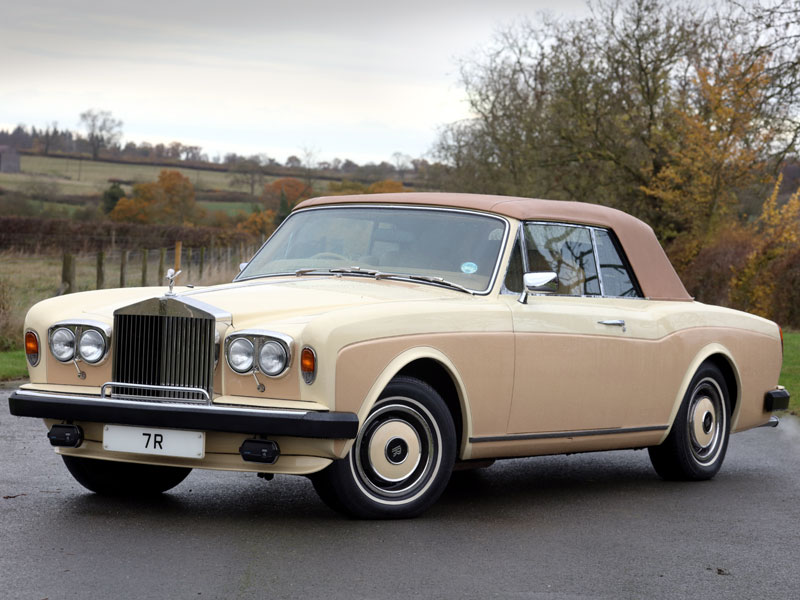 Rolls-Royce registered the Corniche name in the 1930s and apparently assigned it to a prototype based on the Bentley MKV, but the model was never progressed due to the onset of World War Two. The moniker was finally first employed in 1971 on the Coupe and Convertible versions of the Silver Shadow. In common with the Shadow, the newcomer was penned by in-house designer John Polwhele Blatchley and the underbody and floorpan crafted by Pressed Steel Fisher. Initial assembly (including alloy bonnet, bootlid and doors) was thereafter entrusted to Mulliner Park Ward of Willesden, London - by then a wholly-owned division of Rolls-Royce. At this stage the cars were transported to the main factory in Crewe for the installation of the running gear before returning to London for the trimming, painting and finishing. Power was provided by the company's venerable 6.75-litre V8, whose origins could be traced back to the 1950s. This was mated to a GM Turbo Hydramatic 400 three-speed automatic transmission. Suspension was independent by coil springs all round, augmented by a Citroen-originated hydraulic self-levelling system. Braking was by discs, with ventilated units being phased in for 1972. Introduced some five years later, the Series II version of the Corniche gained the same rack and pinion steering and improved front suspension geometry as its Silver Shadow II sibling. Further improved in 1979 / 1980, the coachbuilt cars adopted mineral oil for their hydraulic systems and a modified rear suspension set-up that presaged the one that the Silver Spirit would later adopt. The vast majority of the 2,006 Series II Corniche Convertibles sold between 1977 and 1987 were to left-hand drive specification.

Offered for sale with clear title by order of the High Court, this particular example has formed part of an extensive London-based private collection since it was first UK registered on 4th January 1982. Finished in Café au Lait over Ivory with Sandalwood leather upholstery and a Fawn hood, the Rolls-Royce's chassis number - DRH0050699 - is consistent with a 1980 build date. An HPi check reveals that (a) the Corniche Convertible has had no former keepers and (b) it is not recorded on their stolen, finance, security watch or insurance write off databases. While a UK Government Vehicle MOT History search shows that the four-seater soft-top has seemingly covered less than 1,000 miles over the past decade. MOT tested on 31st May 2006 at an indicated 9,737 miles, its odometer has yet to read 10,600 miles. The overall condition of the Rolls-Royce is consistent with a low mileage vehicle and given the minimal distances covered by its stablemates, we feel there is a good chance that this very stylish Corniche Convertible has covered less than 11,000 miles from new. Offered for sale with sundry old MOTs and service records dating back to 2000 (8,244 miles) and 2002 (8,438 miles) respectively, chassis number DRH0050699 comes with its original handbook, guarantee letter. It is hoped that this apparently very low mileage, one owner motor car will possess a fresh MOT certificate by the time of sale.

PLEASE NOTE: The cherished registration number visible in the photos - '7R' - does not form part of the sale. However, it is available to purchase by separate negotiation.