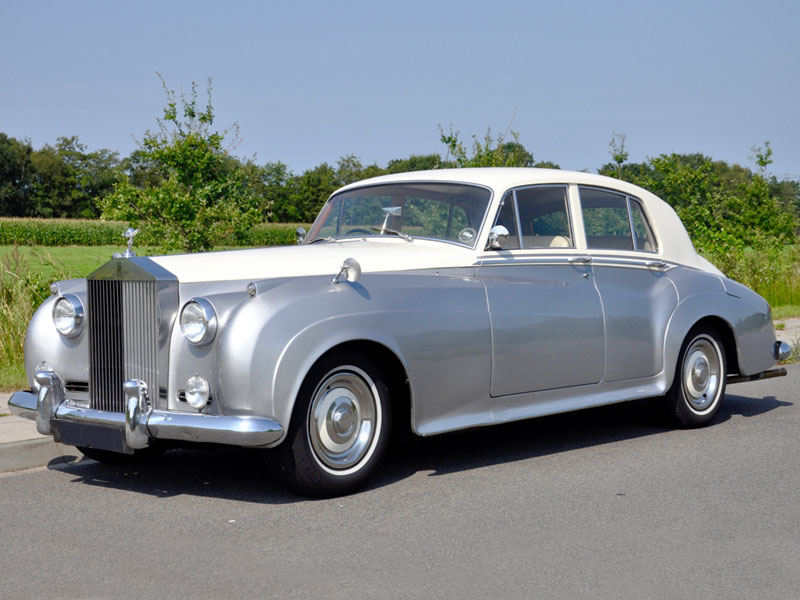 The decidedly eye-catching righthand drive Cloud II on offer is finished in Cream over Silver and trimmed in Blue-piped Cream-coloured hide. It was apparently repatriated from the USA in c.2000 and acquired by the current keeper the following year, who has used it sparingly and dry-stored the Rolls between outings. It was restored in 2002, since when it has been maintained by a Dutch Rolls-Royce and Bentley specialist. The odometer currently displays an unwarranted 82,000 miles. The vendor considers the luxuriously reupholstered interior trim to be 'excellent', and the Standard Steel bodywork, paintwork, V8 engine and automatic transmission to all be in 'very good' order. We understand that at some point the air conditioning system was removed from the car, but it remains complete and forms part of the lot. An apparently fine example of the breed that's now seeking a suitably caring new keeper.

Rolls-Royce launched the Silver Cloud in April 1955. It was based on a completely new closed box section frame topped by a distinguished-looking body penned by in-house designer John Polwhele Blatchley. The proportions belied its considerable overall length of 17ft 8in and clothed all but 157 of the 2,360 Cloud Is eventually produced. The car was powered by an alloy-headed, 4.9-litre straight-six engine that delivered some 155bhp at 4,000 rpm and drove through a four-speed automatic transmission. The Silver Cloud II unveiled in 1959 brought a redesigned ventilation system and standardised power steering. The biggest change, however, was the replacement of the long-serving 4.9-litre six-cylinder engine with an all-alloy 6.2-litre V8 unit. The unquoted output was sufficient to whisk the newcomer to 60mph in under 11 seconds and on to a top speed of 112mph. At total of 2,717 Cloud IIs were built between 1959 and 1962 - 2,418 with the standard wheelbase and 299 with the optional longer one.