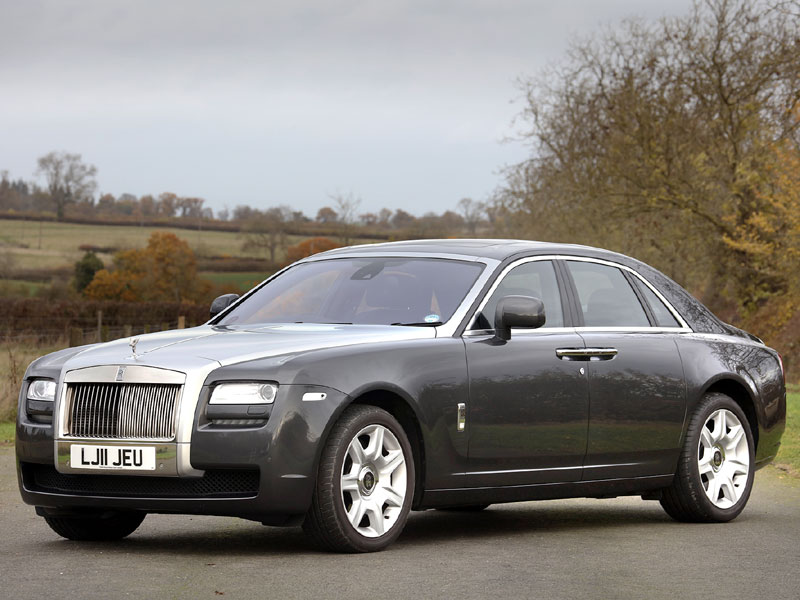 'We love its style, its sumptuousness and the attention to detail that one would expect from a Rolls-Royce. The interior is a very different experience to that in the Phantom, more driver-focused as the Ghost is likely to be driven more by its owners. Yet there is almost as much room in the back and it is no less grand than its bigger brother. Even the rear-hinged back doors are present and correct. Unsurprisingly, it's no Phantom, but instead the less grand, more intimate kind of Rolls-Royce it always needed to be' (Autocar magazine, 2010).

Previewed at the Geneva and Shanghai Motor Shows but formally unveiled in Frankfurt, the Rolls-Royce Ghost was styled by Andreas Thurner. Intended to complement the imperious Phantom, the newcomer was more aesthetically balanced (albeit at the cost of a lesser road presence). Engineered by Helmut Riedl who had overseen the development of its larger sibling, the Ghost was based around a steel monocoque chassis equipped with such advanced fully-independent air suspension that it could detect a rear seat passenger moving from one side to the other and retune accordingly. Maintaining composure was an important consideration given that the svelte saloon's 6.6 litre twin-turbocharged V12 engine produced some 562bhp and 575lbft of torque. Lighter, nimbler and more powerful than the Phantom, the Ghost was reputedly capable of 0-60mph in 4.7 seconds and 155mph (limited). Though, the standard fitment of ZF's excellent eight-speed automatic transmission allowed drivers to progress as serenely or rapidly as they saw fit. A touch bolder in its choice of fixtures and fittings, the Ghost's cabin nonetheless proved a very welcoming cocoon from the outside world. Features shared with the Phantom included the provision of rear-hinged 'coach' doors to access the back seat and a 'floating' RR emblem contained within each wheel centre which remained vertical until the UK's legal motorway speed limit had been exceeded. Still one of the finest luxury saloons money can buy (the model's current list price sans options is £222,888), the 'baby' Rolls-Royce is certainly worthy of its illustrious moniker.

Offered for sale with clear title by order of the High Court, this particular example has formed part of an extensive London-based private collection since 13th October 2011 when it was purchased from Rolls-Royce Motor Cars London for £212,000. Some five months' old at the time, the Ghost had covered just 218 miles. Finished in Gunmetal Metallic with Black leather upholstery, the former offset by a Silver Satin bonnet / windscreen surround and the latter by a Seashell transmission tunnel / door card inserts, 'LJ11 JEU' was built with the following extras: Driver's Assistance Package One (Head-Up Display, Lane Departure Warning), High Beam Assistance, Adaptive Headlights, Camera System, Rear Theatre Configuration, Multimedia Changer, Comfort Entry System, Panoramic Sunroof, RR emblem to all headrests in contrasting Seashell, Individual Seats / Contrast Stitching, Television Tuner, 20in Alloy Wheels, Chromed Visible Exhaust, Extended Leather, Polished Stainless Steel Tread Plates, Picnic Tables and Lambswool Footmats. An HPi check reveals that (a) the Ghost has had one former keeper and (b) it is not recorded on their stolen, finance, security watch or insurance write off databases. While a UK Government Vehicle MOT History search shows that the luxury saloon was MOT tested at 1,668 (2/6/2014) and 2,223 (1/5/2015) miles. Now displaying some 2,800 miles to its odometer, this handsome Ghost will hopefully possess a fresh MOT certificate by the time of sale.