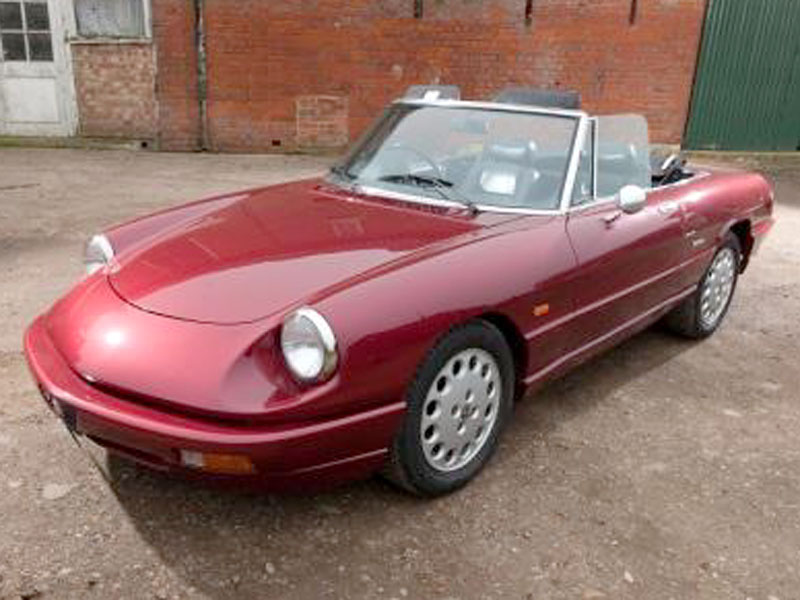 Alfa made the Spider from 1966 to 1993. The Series 4 version was launched in 1990 and employed the same basic bodystyle, mechanicals and chassis as the original 1960s version, but with improved styling over the 1980s models; including colour-coded bumpers and a more luxurious interior. The redesign and manufacture were entrusted to Pininfarina and, while all examples left the factory in LHD form, many (including this car) were imported to the UK and professionally converted to RHD.

This 2-litre (124bhp) export model sports rare, special-order Burgundy-coloured bodywork and a Black leather interior, and is being offered following the completion of an eight month, £4,000 refurbishment. During this, the bodywork, interior and mechanicals were all raised to what the vendor describes as a "very good but not concours standard". He had intended to employ the Alfa on his classic car hire fleet, but a change in policy made it surplus to requirements, meaning the next keeper will be the first to benefit from the improvements. 'H324 DAT' was manufactured in 1990 and was apparently among the first Series 4 models produced, the impressive specification of which includes power steering. It was imported to the UK six years later and the conversion to RHD carried out by Spider specialists Bell & Colvill. By the time the vendor purchased the car in 2010, it had had two British keepers, the last of whom was London-based and retained it for around five years.

By this stage it was reportedly in generally average condition and clearly in need of some TLC. All visible rot was cut out, new body panels fitted as required and the Alfa professionally resprayed in its original colour. As there were receipts showing evidence of significant engine work in the recent past, an overhaul was considered unnecessary - it apparently "runs smoothly with no untoward noises and holds good oil pressure". A "new second-hand" black leather interior, including matching door cards, was installed and a quality made-to-measure black leather carpet set commissioned. Finally, four good, correct-specification alloy wheels and tyres were acquired. Serviced less than 200 miles ago, this iconic Italian classic is now being sold complete with extensive history file and an MOT valid into December.
Share this page: