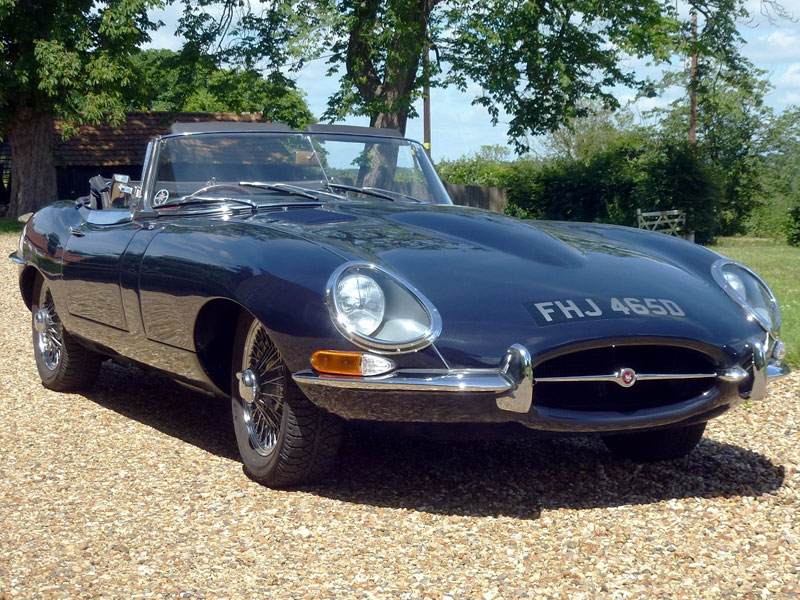 According to its accompanying JDHT Certificate, this Series One 4.2 E-Type Roadster was manufactured on 14 September 1966 and subsequently sold to its first owner, Thayer Bentley Hawkins of Youngstown, Ohio, via distributor Jaguar Cars, New York. Originally finished in Primrose with black interior, the last recorded US owners were also residents of Ohio. Falling into disuse and requiring restoration, the car was imported to the UK in December 1988. At some point, a 3.8-litre engine and Moss gearbox were installed and the car converted to RHD.

Around 1999, as a rolling shell, it was purchased as a 60th birthday gift by the previous owner's wife and given to her husband. He duly set about completing the restoration for which detailed notes of works carried out are recorded in a note book contained in the history file along with an album of photographs and a large amount of receipts for parts. According to an entry by him on website 'xkedata', the body restoration had already been completed by the importer. Due to spending their winters in the Florida sun, progress was slow and the project would not be completed until 2009 / 2010. Repainted in Jaguar Dark Blue and retrimmed in Burgundy leather with a blue mohair hood and tonneau, some mechanical works (including comprehensive overhauls of the engine and gearbox) were carried out by Swallow Engineering of Basildon. Finally, in August 2010, the car was driven on the road for the first time in over thirty years. Acquired by the vendor in 2013, it has been used sparingly and cossetted in a carpeted garage.

Whilst some cosmetic improvements could be made, FHJ 645D performed extremely well on a recent short test drive, as would be expected due to the minimal mileage covered since completion. A desirable Series One E-Type ready to be enjoyed, it is also offered with Swansea V5, MoT to June 2018, owner's handbook, service manual and spares catalogue.