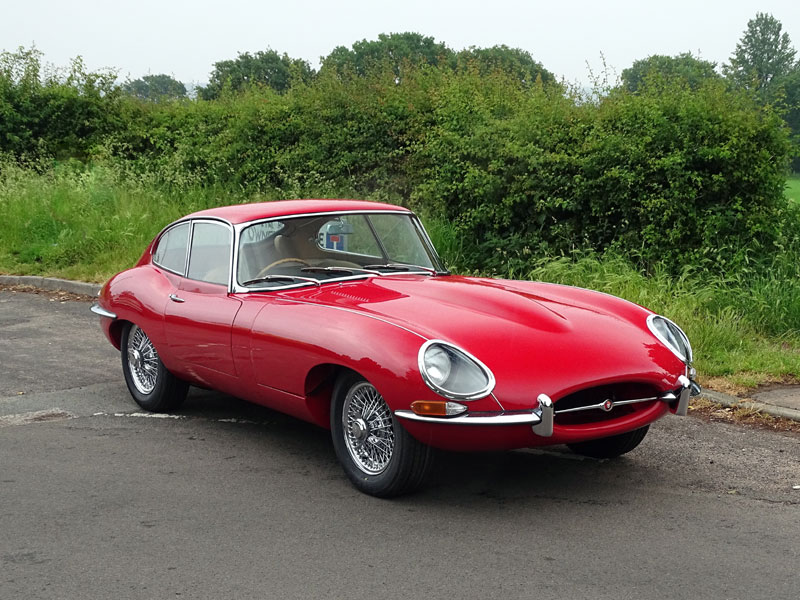 Famously launched at the 1961 Geneva Salon, the Jaguar E-Type created a furore. With its stunning looks, outrageous performance and accessible price tag, the newcomer left rivals reeling and customers clamouring. While, early competition success at the hands of Graham Hill and Roy Salvadori amongst others helped cement its reputation. Built as a monocoque with an engine cradling front sub-frame, the model's combination of all-round independent suspension, rack-and-pinion steering and four-wheel disc brakes gave it excellent roadholding / handling capabilities. Fed by triple SU HD8 carburettors and topped with a 'straight port' DOHC cylinder head, its 3781cc straight-six engine was quoted as developing some 265bhp and 260lbft. Allied to a four-speed Moss gearbox, the free-revving unit reputedly enabled the E-type to sprint from 0-60mph in 6.9 seconds and onto 150mph. Seemingly borrowed from a light aircraft, the wonderful turned aluminium centre console that adorned its dashboard was complemented by scalloped 'Dunlopillo' seats and a wood-rim steering wheel. Achingly beautiful yet viciously quick, the E-type remains for many the ultimate production Jaguar. While any fixed head coupe is desirable, the so-called 'flat floor' cars enjoy a particularly exalted status. Dating from early in the production cycle before Jaguar responded to popular demand and had footwell recesses pressed into the model's previously 'flat-floor' platform so that it could better accommodate tall drivers, they arguably represent the automotive icon in its purist form.

The 88th of just 175 right-hand drive E-Type 3.8 litre 'Flat Floor' Fixed Head Coupes made, chassis 860088 was built on 9th December 1961 and dispatched some ten days later via Henlys of London to supplying dealer Bentalls Ltd of Kingston-on-Thames, Surrey. Registered in that same county as '666 WPH' on 22nd December 1961, the Jaguar was first owned by J.G. Brigg Esq. An accompanying green continuation logbook shows that the two-seater had relocated to Basildon, Essex and the custody of Douglas Turner by March 1972. Thereafter, it is known to have passed through the hands of William Blyth of Rochester, Christopher John Ward of Northfleet, Richard William Gulvin of Gravesend and Army officer Michael John Dixon; the latter changing the E-type's colour to Red during 1976. Re-registered with the DVLA some four years later, the Jaguar was subject to a Vehicle Identity Check and has its engine number recorded as 7E4531-9. However, this is the number visible to its replacement cylinder head. The number stamped into the cylinder block adjacent to the oil filter mount is 'R3083-9' which is the engine number quoted on the Fixed Head Coupe's Jaguar Heritage Production Record Trace Certificate.

Although running and driving when it entered the current ownership in 1986, '666 WPH' was soon found to be in need of extensive restoration. Abbey panels who supplied the E-Type monocoques dispensed with any internal rustproofing and the vendor recalls that once stripped to bare metal it was only the car's bulkhead, roof and chassis legs which did not require major attention. Principally comprising filler and solder the original bonnet was discarded with a new one sourced from SNG Barratt. The seller lead loaded the restored bodywork himself and some thirteen years after it was repainted there are no obvious signs of bubbling. The chassis number 860088 is stamped into what appears to be the original factory fitted 'picture frame' and the Jaguar is understood to pleasingly retain its original body plate too. A labour of love over the past three decades, the refurbishment has not long been completed and thus the E-type still requires shaking down / debugging. A notably early and decidedly rare 'flat floor' fixed head coupe, chassis '88' is offered for sale with V5C Registration Document, Heritage Certificate, restoration photos, sundry invoices and hopefully a fresh MOT certificate.

PLEASE NOTE: This lot does not possess a valid MOT certificate.