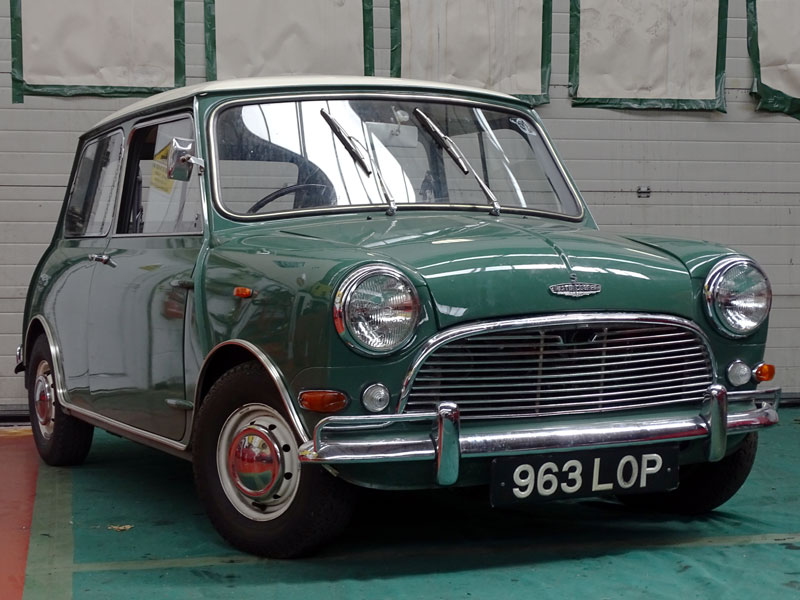 Only 4,000 or so 1071cc-engined Mini Cooper S cars were made between April 1963 and August 1964. A Morris version built on January 2nd 1964, chassis K-A2S4-488266 was despatched to the Austin Motor Company's Experimental Department in Longbridge thereafter. Reportedly the sole survivor of just three Cooper S cars converted to hatchback specification and the only one to feature a steel rather than GRP tailgate, the re-badged Mini's first private keeper was the Rt Hon Ernest Marples MP who took delivery on August 22nd 1968. Notable for opening the M1 motorway and introducing more rigorous MOT tests plus the use of breathalysers, the former Minister for Transport is understood to have specifically wanted a hatchback to accommodate his golf clubs and / or the produce of his own vineyard! Having tried to place an order with John Cooper at the Racing Car Show, Lord Marples (as he became) was referred to the Chairman of BMC, George Harriman. As well as a bespoke folding rear bench seat, reversed door handles and special window frames, the unique Mini featured a padded headlining and dash rails not to mention non-standard front indicators and side repeater lights. However, it is not known whether these additions were made at the behest of its safety conscious first owner or while the car was resident in the Experimental Department. Part-exchanged by Lord Marples during 1974 for a Renault 5, the Austin (nee Morris) passed to enthusiast Alan Meaker eleven years later who embarked upon a concours standard restoration that was finally completed in 1994 with the help of Dave Gilbert from Classic Coopers. 'Replacing what I had to . . . repairing what I could', Mr Meaker was able to refurbish the original bodyshell and sourced a correct-type 1071cc S engine as well as factory specification 3.5J x 10inch slotted Cooper S wheels. Having covered just c.100 miles since its engine was overhauled, this historic Mini is deemed by the vendor to be in 'very good overall' condition.