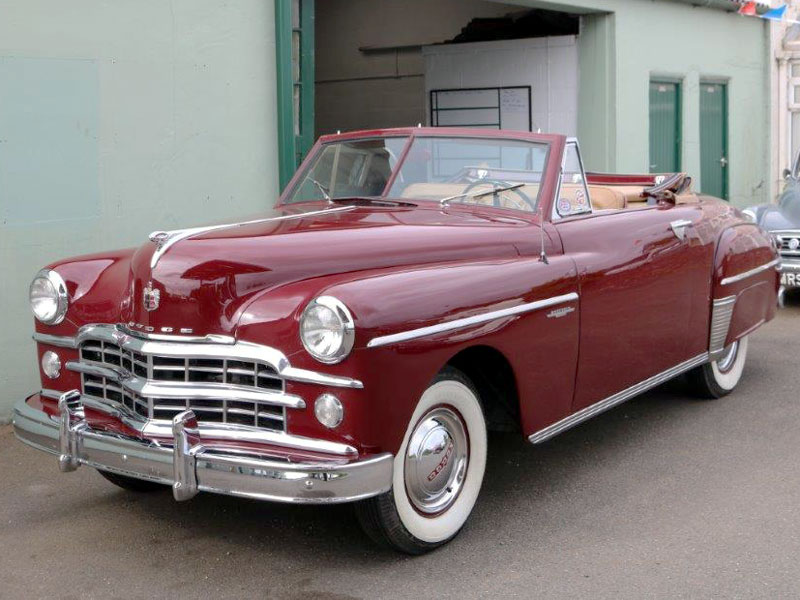 - Understood to have been fully restored in 2011

- Imported into the UK from Canada, where it had been a multiple trophy winner

Low-cost two-seat Roadsters were plentiful and popular on the American market in the `20s, but somehow fell out of favour. So, in an attempt to spice up an otherwise rather lacklustre line-up 20 years later, Dodge hit upon the idea of turning the clock back and including a basic Roadster within its new 1949 Wayfarer range, that also comprised a two-door Saloon and Business Coupe and, of 63,816 Wayfarers sold that year, 5,420 were Roadsters. The emphasis was on fun and affordability, so the specification included a single bench-type front seat and relatively rudimentary hood. Power was provided by an L head straight-six engine of 3.8-litres. Those lower than hoped-for first year sales were put down to the post-war public requiring more creature comforts that their predecessors, so for 1950 the Roadster was slightly up-specced and renamed the Sportabout. As the required targets were still not met, the model had been dropped from the range by 1952, but there is no doubt its initial inclusion had created some much-needed interest in the otherwise rather tired Dodge brand and, as is so often the way (think MG C for example) the Roadster, the model that never quite took off in period, is now the most sought after of the Wayfarer family.

The delightful 1949 example now offered was imported into the UK from Canada, where it had been a multiple trophy winner. It is understood to have been fully restored in 2011, work that included the fitment of new glass throughout and a fresh interior. The Dodge is presented in Aircruiser Red allied to Beige upholstery and the vendor these days classes the bodywork, paintwork, interior trim, engine and manual three-speed transmission as all being in `Excellent' order. He says it `runs and drives very well' and is selling the car with MOT into June 2018.