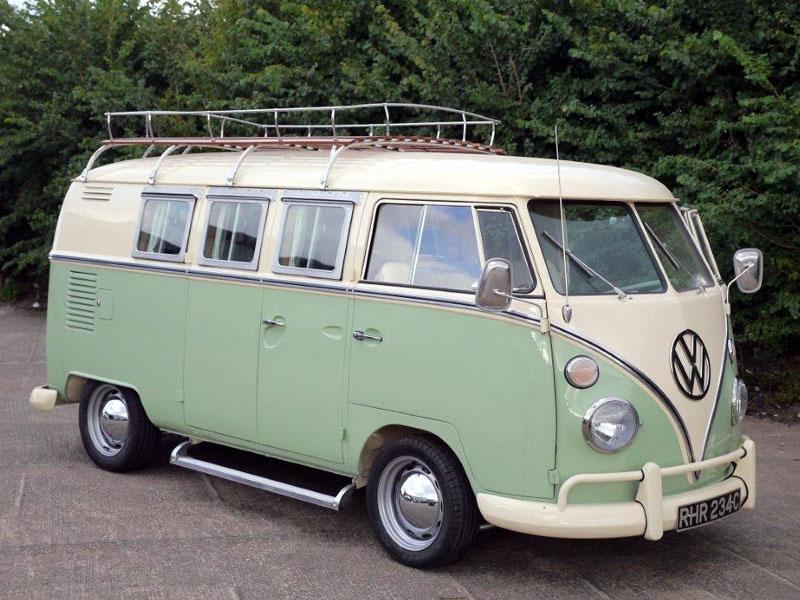 - Air-cooled, 140bhp 2.4-litre engine built to special order in the US

The Volkswagen Type 2 (the Beetle was Type 1) has long since acquired cult status courtesy of such diverse celebrity owners as Jamie Oliver, Martin Clunes, Roger Daltry and Jenson Button. It has been home to generations of travelling Australians, helped hippies survive the '60s/'70s and become the transport of choice for many a surfer. Variously available in Van, Bus, Pick-up and Camper guises, it would probably have been nicknamed the 'car that changed the world' if the Model T hadn't got there first.

The now much sought after Splitscreen T1 version was launched in 1950, of which this left-hand drive Camper Van is understood to be an immaculate example. Manufactured in 1965, it started life in New York before heading West to Los Angeles. The apparently superb 2012-2015 restoration was carried out here in the UK, where the 'veedub' was granted the registration 'RHR 234C' in June last year. The super smart exterior is finished in the pleasing combination of Green and Cream, as is the sumptuous full leather interior. This is complemented by an Alcantara roof lining, quality bespoke oak storage units, Rock & Roll bed and yacht deck flooring. With just 1,500 miles covered since its restoration, the Camper is reportedly 'virtually as new inside and out' and considered by the vendor to be in 'excellent overall' condition. The engine is a 140bhp 2.4-litre unit built to order in Los Angeles and drives through a bespoke gearbox built for restful high-speed cruising. The chassis upgrades include an IRS conversion and the Camper rides on 16in Bullet wheels. This highly-desirable VW comes complete with additional sound proofing, comprehensive internal lighting, seating for six, sink, fridge, auxiliary battery and plug point, safe, one key locking system, Cobra immobiliser/alarm, roof rack and ladder, oil temperature gauge, and replica period radio with Bluetooth and MP3 connectivity. Stunning!