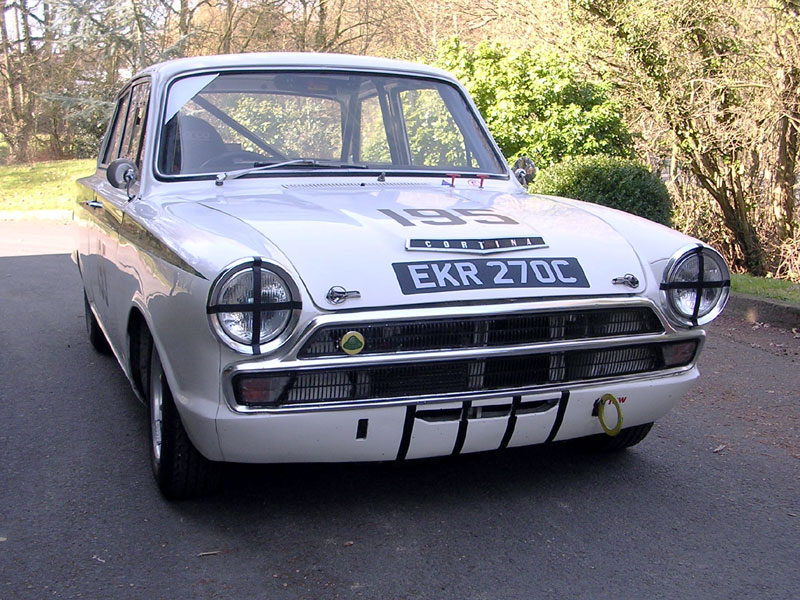 Mindful that the Harry Mundy and Keith Duckworth developed Lotus 'Twin-Cam' unit was based on his firm's 116E four-cylinder engine, Walter Hayes asked Colin Chapman to build 1,000 Lotus-powered Ford saloons for Group 2 homologation purposes. Although, based around a Cortina two-door monocoque bodyshell, the resultant Type 28 Lotus (or Cortina-Lotus in Ford speak) boasted a heavily revised suspension set-up, lightweight body panels and servo-assisted disc / drum brakes. Producing some 105bhp and 108lbft of torque, its 1558cc powerplant was allied to a close ratio four-speed manual gearbox and drove the rear wheels via an alloy-cased differential. Sadly, this latter component proved somewhat failure-prone due to the loads put on it by the redesigned A-bracket / twin trailing arm-located back axle. Progressively reworked in the interests of reliability / ease of maintenance, the Lotus-Cortina gained a two-piece propshaft, wider-spaced gear ratios, steel panels, Airflow styling (complete with full-width grille) and a stronger leaf-sprung rear axle. Tacking to the tracks in September 1963, its maiden outing at the Oulton Gold Cup was rewarded with 3rd and 4th places behind two Ford 7-litre Galaxies.

As part of Ford's 'Total Performance' programme, the Lotus-Cortina found itself competing not only in Europe but as far afield as America, South Africa and New Zealand. A resounding success, the 1964 season saw Jim Clark win the British Saloon Car Championship, Jackie Stewart / Mike Beckwith triumph in the Malboro 12-hour and Alan Mann Racing take a 1-2 victory in the 'Motor' 6-hour International Touring Car Race at Brands Hatch. While, the adoption of the tougher leaf-sprung back axle helped Sir John Whitmore secure the 1965 European Touring Car Championship and Jackie Ickx claim that year's Belgian Saloon Car Championship. Brilliant on tarmac but surprisingly capable when off it too; the Lotus-Cortina's first Works Rally win was at the 1965 Welsh International. However, the following season yielded rather more silverware with victories on the Acropolis, RAC, Geneva and Canadian Shell 4000 events. Highly sought after as a road car thanks to its class-leading performance and handling, the MKI Lotus-Cortina remained in production until 1966 by which time some 3,301 are thought to have been made.

"This particular example began life as a road car but was converted into a racer following its acquisition by David Ramsbotham, a former Aston Martin finance director, in 1987. Issued with FIA papers two years later, it ran in the German Historic Touring Car Championship and at a variety of UK events between 1990 and 1994. Passing to Roger Bennington of the Stratton Motor Company during 1999, 'EKR 270C' was driven by Jack Sears as the pace car for the Heritage GT Series (part of the British Touring Car Championship TOCA Tour) at Snetterton in 2001. Acquiring the Lotus Cortina that same year, Martin Angle commissioned the Stratton Motor Company to rework it to a higher / more competitive racing specification.

Conforming to FIA Appendix K specification and granted updated FIA papers accordingly, the two-door saloon was campaigned with assistance from Roger Bennington and the late Jim Morgan (of JTM Racing Services) in the Top Hat and HSCC pre-1965 Touring car events plus the AMOC Lotus Roadsports Series. Piloted by Martin Angle, his two sons Barnaby and Hugh, and the legendary Jackie Oliver, the car recorded a number of class wins at venues such as Oulton Park, Silverstone, Snetterton, Mallory Park and Chimay, Belgium. It also narrowly missed out on a class win at Spa and qualified on the front row in Pau, France during 2004 (though, Martin Angle and Jackie Oliver were forced to retire from the race). Legends Automotive Ltd of Gloucestershire subsequently took over the Ford and had its twin-cam engine and four-speed manual gearbox thoroughly overhauled by Connaught in April 2005.

Sold to Fred Philips the following month, 'EKR 270C' set the fastest lap at the Brands Hatch Historic Super Prix, July 23rd-24th 2005, only to finish mid-field. Contesting the Silverstone Classic and Oulton Park Gold Cup later that season, it was shipped to South Africa in early 2006 and took a strong 4th-in-class at the Springbok Revival Meeting. Suffering a gearbox failure shortly afterwards, the car underwent repairs by V.A. Motorsport of Holland before returning to South Africa for the 2007 season during which it entered the Springbok Revival Meeting and Kyalami 9-Hour Revival etc; claiming 4th on the Index of Performance in the latter event. Since entering my ownership, the Lotus Cortina has been maintained and prepared by Martin Stretton Racing. It was last out at Spa during late 2009 in the U2TC and Top Hat races and proved very competitive being driven by one of my sons who recorded two top ten finishes amid a very large entry".

Finished in the archetypal livery of white with green stripes, the two-door saloon is described by the seller as being in "good" condition with regard to its engine, gearbox and electrical equipment, while he rates the bodywork and paintwork as "excellent". He adds that 'EKR 270C' is "ready to race apart from the usual pre-race checks". Summed up as a "well presented and very quick car", this appealing Lotus Cortina is offered for sale with V5C Registration Document, FIA HTP papers and extensive history file.
Share: