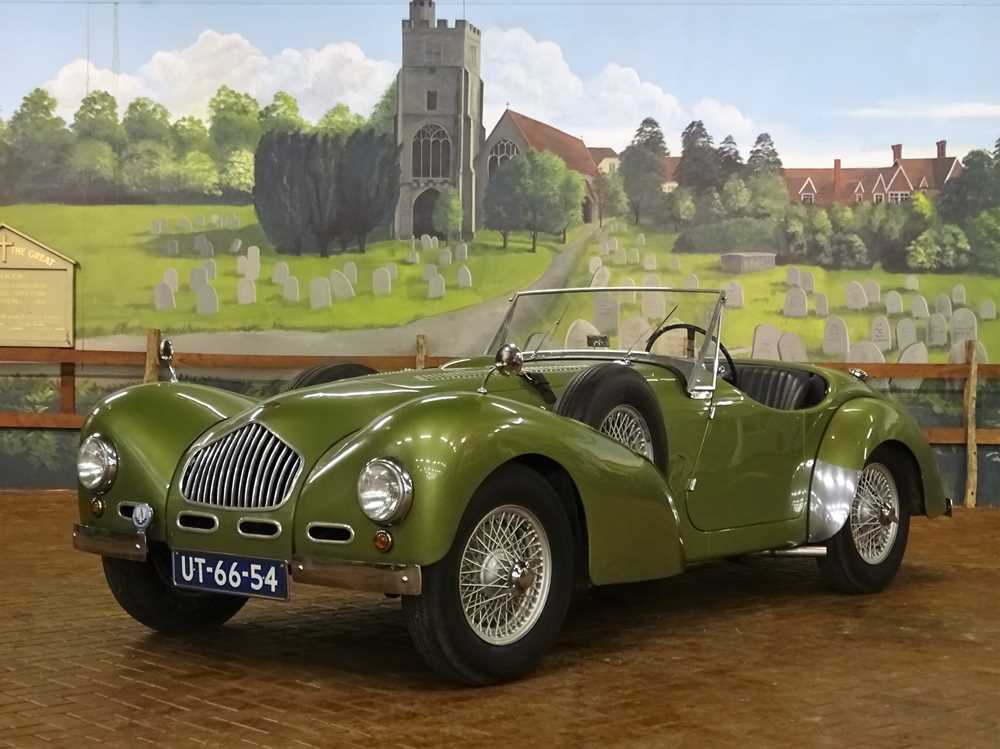 Paperwork on file from likes of Allard archivist and historian Gavin Allard suggests that chassis K2-2029 was initially ordered by Major Richard Seddon’s R/P Imported Motor Car Co Ltd of New York in late January 1951. Specified with White paint, Black leather upholstery and a De Dion rear axle. It was also due to be modified to take a Cadillac V8 engine. A factory memo dated 19th March 1951 requests a livery change to Bronze with Red hide, while copy Allard Motor Co Ltd Engineers Instructions have ‘Seddon’ and ‘Modify for Cadillac’ crossed out and ‘4375cc, Engine: 7018/87’ and ‘N.V. Haarlemache Auto Centrale’ added. Finally, the authentic Allard Motor Company Record Card for chassis K2-2029 confirms that it was built in left-hand drive with De Dion rear axle, 6 wire wheels, spare wheels in front wings and Mercury Engine Number: 7018/87 and supplied to N.V. Haarlemache Auto Centrale for G.J. Th. A. Van Wuck of Asten, Holland. The same document lists the order and delivery dates as June 4th and June 7th 1951 respectively which is interesting to say the least given that Allard often took five months rather than three days to complete a K2! Coincidentally (or not), the Record Card for chassis K2-2030 reveals that it was built in left-hand drive with De Dion rear end, 6 wire wheels, spare wheels in wings and Cadillac modification and delivered to R/P Imported Motor Car Co Ltd of New York on 11th July 1951 having been ordered on 25th January 1951. The quick turnaround from order to delivery of chassis K2-2029 indicates it was already built and awaiting despatch. It is our understanding that only a handful or so of the 117 K2s made featured front wing mounted spare wheels. The model was available with a choice of live or De Dion rear axles with the latter allowing the fitment of wire (rather than steel) wheels. The De Dion equipped cars handled better and were often used for competition in the Watkins Glen and Australian GPs.

There is no indication of how long Mr Van Wuck kept chassis K2-2029 or whether he ever raced or rallied it. However, the two-seater belonged to Andre Boomkens of The Hague by February 1970 who sold it to the vendor, Dick Van Dijk, some fourteen years later as a ‘Racewagen’ or racing car. Mr Boomkens also told Mr Van Dijk that Mr Van Wuck had been a dentist by profession. Interestingly, photos on file from the mid-1980s show the Allard painted White, the same colour as on Major Seddon’s initial order form (though, its Record Card states Royal Blue). Mr Van Dijk was drawn to chassis K2-2029 because it was the only K2 supplied new to his native country. A true petrolhead, he amassed a museum collection of over 100 collector cars and had the Allard extensively restored by Rod Jolley and Solent Engineering during the mid-1990s. Rewired, repainted and retrimmed, the Allard also had attention paid to its gearbox, ash frame, steering box, front suspension and fuel system etc. The aluminium bodywork was modified to accept a hood frame and a new hood, tonneau cover and sidescreens fabricated. Little used since completion, the K2 was nonetheless treated to an extensive engine overhaul in 2015 including the fitment of new ‘Edelbrock’ 24-stud aluminium cylinder heads. The hope being that Mr Van Dijk and his son could use the car for historic rallying something that work commitments on both sides prevented (Mr Van Dijk’s son being too busy preparing engines for the Paris-Dakar Rally etc).

Part of Mr Van Dijk’s collection for the past thirty-seven years, chassis K2-2029 would doubtless benefit from some recommissioning before returning to the road. Not currently registered, accompanying paperwork includes an old registration document issued to Andre Boomkens on 4th June 1974 for the Dutch numberplate ‘UT-66-54’. Stunning looking in period Pacific Green metallic with Black leather upholstery and weather gear, this unique Allard K2 is a testament to Rod Jolley’s restoration skills. Worthy of close inspection, it is offered for sale with a large history file.

Introduced in 1950, the K2 roadster sported a revised radiator grille, usable boot, cut-away doors and Buick-esque portholes to each flank. Benefiting from the same improved Allard coil-sprung divided front axle damped via tubular shock absorbers as the J2 and P1 models, not to mention a more sophisticated Phase 2 Lockheed braking system, the newcomer was propelled by a choice of Ford 3.6 litre or Mercury 3.9 litre 'Flathead' V8 engines mated to three-speed manual transmission (although, most American examples were supplied without powertrains). Only in production until 1952, just 117 K2s are thought to have been made.