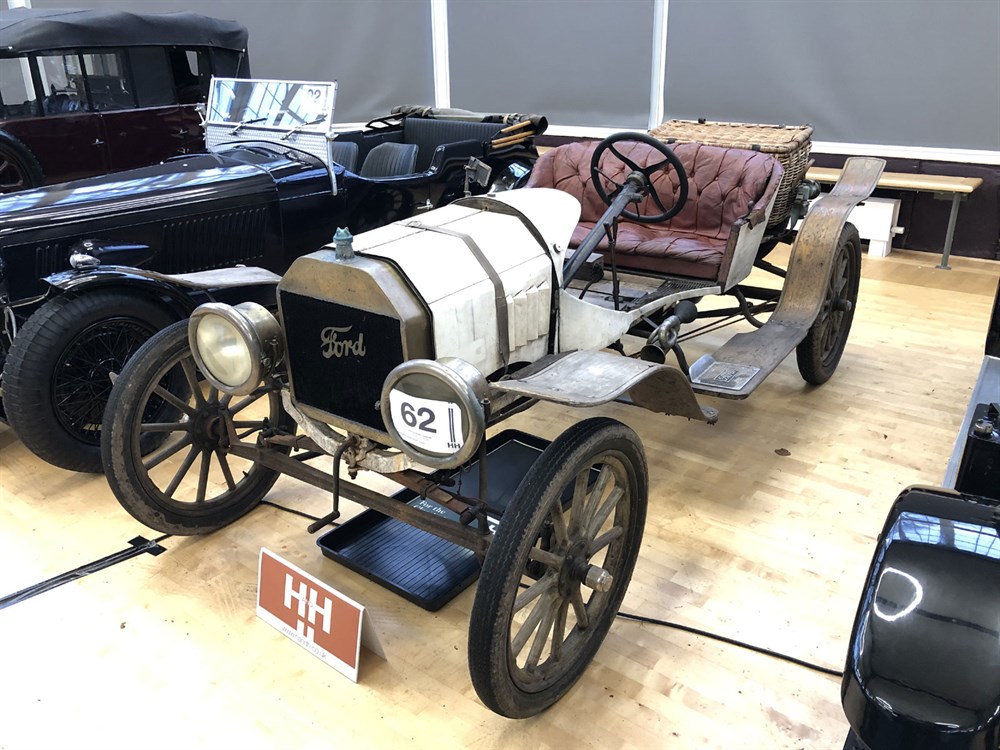 This fabulous early Model T is a real crowd pleaser. It was apparently built as a `Torpedo' Runabout and later transformed into a rakish Speedster for an adventurer's transcontinental expeditions. In more recent times, `BF 5103' was discovered in a dilapidated state in the American Mid-West and imported into the UK in 2006, after which it was reportedly treated to a sympathetic programme of conservation. The original headlights were upgraded with more powerful `C.M. Hall of Detroit' brass lamps from a 1913 Buick, whilst Lucas `Diver's Helmet' acetylenes from an early British motor tricycle comprise the illumination at the rear! A unique aluminum bonnet with extended cockpit cowl was added to provide stylish protection for the occupants (and the trembler coils!). The standard Model T mudguards were replaced with much lighter and more elegant curved wood examples reputedly from a US-built 1902 De Dion Vis-a-Vis. However, the car also retains many 1912-style features, such as the hickory wooden spoke wheels and button-back Chesterfield leather upholstery. Around the early `20s, the Ford is thought to have had a major `off', as it now features a later 1916 chassis and an updated engine (circa 1923), that is fitted with both hand-crank and desirable starter motor.

Sparingly used since entering the current ownership, 'BF 5103' has nonetheless been uprated with Rocky Mountain rear brakes and treated to a new, correct-type radiator core. The vendor advises us that the Ford would benefit from a degree of recommissioning and a replacement exhaust. These early `brass rad' Model T Fords are remarkably usable - what better way to go Edwardian motoring?