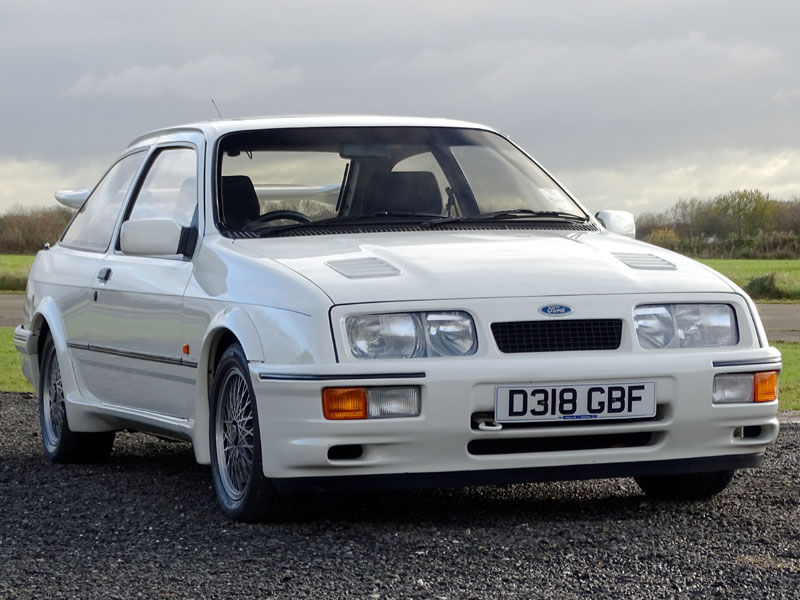 Introduced at the 1985 Geneva Motor Show, the Ford Sierra RS Cosworth - the first Blue Oval product to wear a Cosworth badge - was the brainchild of Stuart Turner and his team. Conceived as a means of homologating the Sierra for Group A Touring Car Racing, the newcomer's three-door monocoque bodyshell was aerodynamically enhanced via a deep front air dam, side skirts and 'whale tail' rear spoiler. Powered by a Cosworth-designed 2-litre DOHC 16-valve turbo engine allied to Borg Warner T5 manual transmission, the rear-wheel drive hatchback was credited with developing some 204bhp and 205lbft. Reputedly capable of 0-60mph in 6.2 seconds and 149.5mph in standard tune, total production of the first generation RS Cosworth is thought to have amounted to just 5,542 cars.

First registered to Ford dealer Kirbys of Wrexham, this particular example was maintained by them up to 29,547 miles. Serviced seven times thereafter (most recently on August 1st 2016), it has covered just over 55,000 miles from new. Uprated by Cosworth specialist Graham Goode Racing with their Level 2 engine conversion at 48,240 miles (29/9/06), the RS has since benefited from a Cometic WRC-type head gasket at 48,670 miles (15/4/07) not to mention a new cambelt / other drive belts and replacement water pump at 50,860 miles (29/6/10). Obviously much loved, the Fast Ford has been exhibited at numerous shows on both sides of the Irish Sea with its most recent prize being awarded at the 2012 Tatton Park Classic Car Show. Finished in its original livery of Diamond White with Raven Fabric cloth upholstery, 'D318 GBF' sports a Mongoose stainless steel exhaust and is described by the vendor as being in 'very good overall' condition. Offered for sale with original book pack, history file, CD workshop manual and MOT certificate valid until 31st July 2017.

PLEASE NOTE: The chassis number for this vehicle is WF0EXXGBBEGR93447 and not as previously stated.