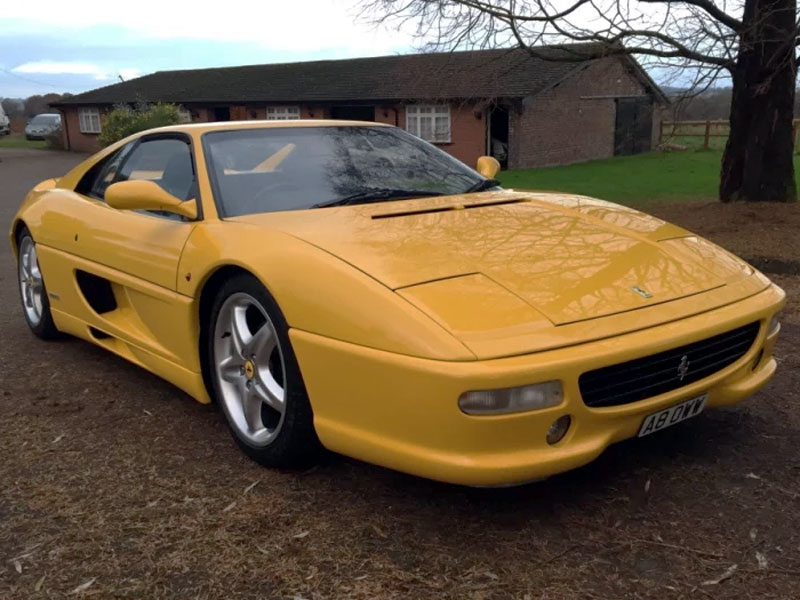 Reputedly capable of 0-60mph in 4.6 seconds, 0-100mph in 10.6 seconds and 185mph, the Pininfarina-styled F355 was an undoubted supercar. Introduced at the May 1994 Geneva Salon, the F355 could be had in fixed-head Berlinetta or targa-roofed GTS guises (though, a Spider later joined the range). Based around a robot-welded sheet steel monocoque equipped with all-round independent double-wishbone suspension, ventilated ABS disc brakes and power-assisted rack-and-pinion steering, the two-seater featured a new computer-controlled electronic damper system that self-adjusted depending upon the feedback gleaned from various road speed, brake pressure, suspension loading and steering sensors. Further enhanced by a ground-effects undertray, the F355 was revealed to be seven seconds a lap faster round Ferrari's Fiorano test track than the 348 (and four seconds quicker than a 512TR). Beautifully trimmed, the model's cosseting interior came with leather upholstery, electric windows and air-conditioning as standard. Longitudinally mid-mounted, its 3.5-litre `quad cam' V8 employed five valves per cylinder, revved to 8,250rpm and developed 375bhp / 268lbft of torque. Faster yet more forgiving than its 348 predecessor, the F355 became an almost instant classic. Of the 4,915 Berlinettas made, just 496 were UK-supplied, RHD cars.

Finished in Giallo Fly Yellow with Dark Blue leather upholstery, this particular example is described by the vendor as being in `very good' (bodywork, paintwork) or `excellent' (engine, six-speed manual gearbox, electrical equipment, interior trim) condition. Accompanied by an extensive main dealer and specialist service history contained within two folders (1996-2008 / 2009-2016), the F355 belonged to its last keeper for seven years. Treated to a new clutch and cambelt service during January 2016, `A8 OWW' is understood to have covered just 62,400 miles from new. An early power steering and airbag equipped model that pleasingly retains its original tool kit, handbooks and keys, this sought after F355 manual also boasts a MOT certificate valid until July 2017.