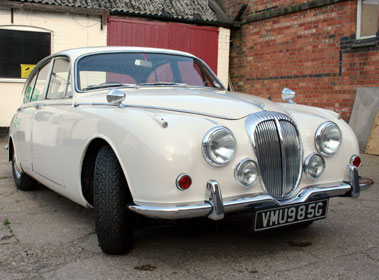 A derivative of the ubiquitous MKII Jaguar saloon, the Daimler V8-250 drew its moniker from the engine that powered it - a lightweight, 8-cylinder unit of 2548cc designed by the man behind Triumph's already famous twin-cylinder motorcycle engine, Edward Turner. Turner's super smooth V8 was first seen in the Daimler SP250 (nee Dart) sports car launched in 1959. Following the merger between Jaguar and Daimler the following year, the new company decided the V8 was the perfect basis for an upmarket version of the MKII Jaguar. Being more powerful than Jaguar's own 2.4-litre straight six engine, the V8 endowed the saloon with greater performance, and being lighter it resulted in less weight over the car's front wheels and therefore arguably superior handling and more nimble steering. The 140bhp unit was mated to a Borg Warner three-speed automatic gearbox. Braking was by discs all round while the suspension was independent courtesy of coil springs and wishbones at the front and a live axle with semi-elliptic leaf springs at the rear. Maximum speed was around 110mph and the V8 could accomplish the 0-60mph dash in around 12 seconds. Daimler versions of the MKII were readily distinguishable by the heavily fluted tops of their chrome radiator grilles and, of course, lacked the 'leaping cat' bonnet mascots of their Jaguar siblings. By the time manufacture of all MKII derivatives ceased in 1969, some 17,620 examples of the Daimler version had been produced.
The V8 on offer is a 1968 model finished in white with black upholstery. It is described by the vendor as being in "very good" condition with regard to its engine, automatic transmission, bodywork and paintwork, while he rates the electrical equipment and interior trim as "good". In recent times the V8 has apparently undergone extensive repair and cleaning and the bodywork and interior have been the subject of considerable restoration work, as confirmed by a collection of some 100 photos. The car comes complete with original workshop, operating and maintenance manuals, plus original sales brochure and JDHT certificate. It is MOT'd and taxed until April next year.
Share: