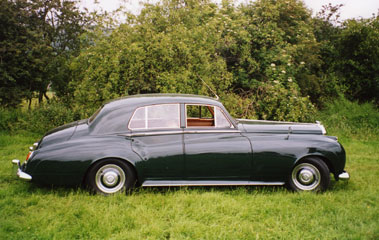 Typifying the growing economic confidence of the mid 1950s, the Bentley S1 was larger, faster and more boldly styled than its MKVI predecessor. Introduced in 1955, there was nothing average about its 'Standard Steel Saloon' bodywork. A masterclass in formal elegance, it was underpinned by a new cruciform-braced box-section chassis equipped with independent coil-sprung front suspension, a 'live' rear axle and servo-assisted four-wheel drum brakes. Powered by a twin SU carburettor fed 4887cc straight-six engine allied to standard-fit four-speed automatic transmission, the S1 could waft along at over 100mph. Once affectionately described as "a veritable country club on wheels", the model certainly boasted an inviting cabin. Trimmed with the finest hides, carpets and wood veneers, it promised relaxation and contentment.

Finished in Goodwood Green with tan leather upholstery, this particular example is variously described by the vendor as being in "good" (electrical equipment), "very good" (interior trim) or "excellent" (engine, chassis, bodywork, paintwork) condition. Reportedly treated to a "bare metal restoration about twelve years ago" by its previous keeper who was also responsible for a lavish re-trim (new upholstery, headlining and carpets), 'CSL 689' has been in the current ownership since 2001. While, last year the Bentley is said to have benefited from an overhaul of its four-speed automatic transmission as well as some re-chroming (radiator grille, bumpers) and new tyres. Currently running on unleaded, the handsome four-door saloon is further understood to have been "driven extensively to Hampshire, Wiltshire, Essex, North Yorkshire, Aintree, Cheltenham, Doncaster and Kelso for horse racing". Something of a thoroughbred itself, this striking S1 is offered for sale with MOT certificate valid until 12th October 2007 and historic class (free) road tax valid until October 2007.