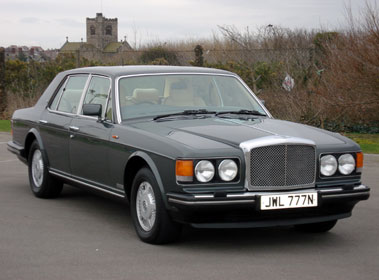 Introduced in 1984, the 'Eight' was intended to attract younger, more entrepreneurial buyers to the newly resurgent Bentley marque. A more sporting proposition than its 'Mulsanne' sibling thanks to specially stiffened front suspension and sharper steering, the newcomer was visually distinguished by a Le Mans-esque wire mesh radiator grille (though, a more conventional slatted grille was still optional). Powered by Crewe's iconic 6.75 litre V8 engine mated to three-speed automatic transmission, the handsome four-door saloon was reputedly capable of 130mph. Trading picnic tables and maple eye walnut for grained wood veneers and a substantial price cut, the 'Eight' was a conspicuous success. Upgraded in 1986 with ABS brakes and Bosch fuel injection, it had its target audience extended to include Europe and the USA. Thus, by the time it ceased production in 1992, some 1,736 had been sold worldwide.

Finished in Graphite Metallic with Parchment leather upholstery, this particular example is described by the vendor as being in "excellent" condition with regard to its engine, automatic transmission, electrical equipment, interior trim, bodywork and paintwork. Reportedly with the same family (husband and wife) from 1991 until 2008 when it entered the current ownership, 'JWL 777N' has covered some 27,000 miles from new. Boasting "a higher specification than a standard 'Eight' with a full centre console and better quality door cappings", the luxury saloon is said to "run and drive as it should". While, we are further informed that its "leather upholstery, woodwork, carpets, instruments and lambswool overmats are all beautiful". Benefiting from "a full service history with entries in the book at 2,000, 4,000, 11,000, 16,000, 18,000, 20,000, 24,000 and 26,000 miles", the Bentley's odometer currently shows 26,867 miles (as of late May). Subtly enhanced via the installation of "a high level brake light, CD changer and parking sensors", the seller believes that the 'Eight' "must surely be one of the best available". Riding on alloy wheels, this smart, low mileage Bentley is offered for sale with MOT certificate valid until May 2010.