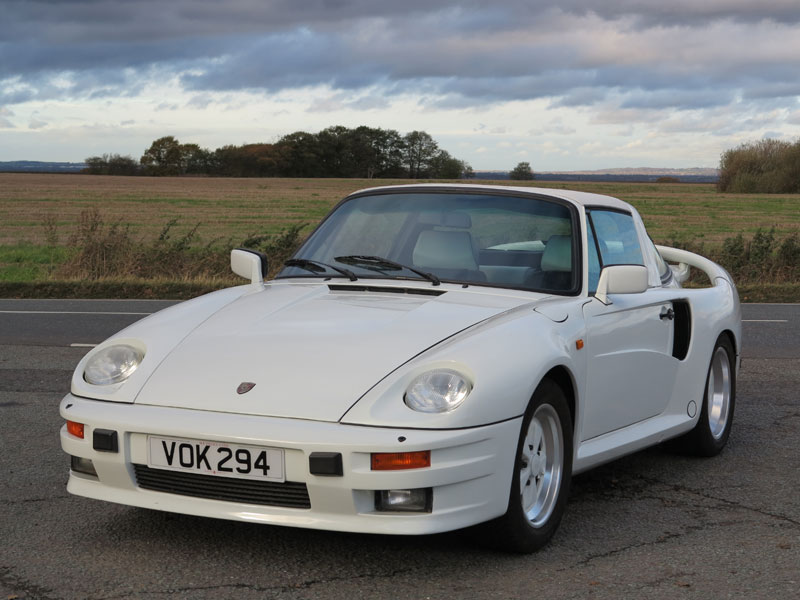 This amazing-looking 911 Turbo Targa is one of just two created by German car designer Rainer Buchmann's Frankfurt-based bb company in 1985, at a cost of c.DM250,000. It was remodelled in steel, features standard Porsche 930 running gear - ie 3.3-litre flat-six engine and four-speed manual transmission - but boasts a highly innovative bb digital dashboard. Thirty years later, this extraordinary Porsche has reputedly covered just 10,921 miles. We are grateful to the vendor for the detail contained in the following background information.

The Porsche these days registered `VOK 294' started life as a standard 1985 911 Turbo Coupé that was delivered new to Charles Follett, London and allocated the registration `B911 XYB'. The car was Grand Prix White with contrasting Burgundy leather interior. So how did it obtain its Targa top and become adorned with a flat-nose front, 959-esque rear and Black and White hide interior? That's the question that Chris Healey, who bought the 911 back in 1990, set out to answer. "I wrote to Porsche who informed me that, as far as they knew, the car was a White 911 Turbo Coupe with limited-slip differential and colour coded alloy wheels."

He eventually established the car's up-to-date identity by talking direct to bb's Rainer Buchmann who "straightaway confirmed that this was one of the last cars his company had worked on. bb (not b+b, or B+B), existed from the mid-1970s to mid-1980s, carrying out exclusive modifications to the cars of the always rich and often famous. Far from being a mere customiser, the firm was responsible for some major innovations in the automotive world, including remote central locking and the first fully functioning digital dashboard." Buchmann revealed: "The car has a 928-style front with original Porsche 928 lights, redesigned side sills, and a new rear fashioned by a Mexican I had working for me called Carlos Sanchez."

bb based the Targa conversion on the shell of a standard 930 Coupe, re-strengthening the body as required. And where today's modifiers make extensive (and expensive) use of carbon fibre, back in the `80s the material of choice for most design houses was fibreglass. For bb though, steel was the best material for the job, as Buchmann said: "If it wasn't done in steel there would be vibrations where the existing steel and fibreglass met. This wasn't in keeping with the Porsche quality." The result of all bb's fettling is a 911 that looks totally bespoke, though it is worth noting that there were in fact two such cars built: this White right-hand drive example, and a left-hand drive one in Black, both of which were displayed on bb's stand at the 1986 Geneva Salon.

Using the car for the next couple of years, Healey took the total mileage up to a scant 10,000 before putting it into storage. It was recommissioned in May 2004 via Loe Bank Motors, Bury at a cost of c. £4,000. The Porsche has since undergone a further period of hibernation (2006-2015) and thus its indicated mileage still only sits at a highly credible but unwarranted 10,921. Recent work has seen the Turbo Targa treated to a fully overhauled fuel metering unit, new injector (x6) and fresh tyres all round. A real 1980s throwback and wonderful period piece, this unique Porsche is offered for sale with V5C Registration Document, copy magazine article, tool kit, bespoke stereo system and MOT certificate valid until November 2016.